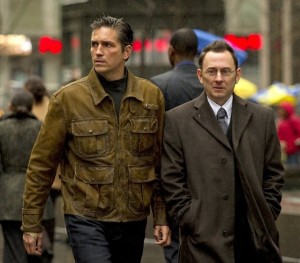 Person of Interest (CBS, Thursdays 9/8c) is, essentially, the story of two men--one with money, and one with awesome spy skills--who are trying to save people's lives.

The one with money, Mr. Finch, has a way to learn the Social Security number of someone who will be involved in a violent crime (spoilers below about how this happens).  He doesn't know if that person will be the victim, or, as was frequently stressed during the pilot episode, the criminal--all he knows is that the person will somehow be involved.  This person, identified only by his or her SSN, is the first meaning for "person of interest" in the show.

The second "person of interest" is former CIA agent John Reese, who is a homeless drunk at the beginning of the pilot.  Mr. Finch knows about Reese and his skills, and enlists him to help in saving lives based on the SSNs he receives.  But Reese has also attracted the attention of the NYPD--primarily Detective Carter (played by Taraji P. Henson)--making him another "person of interest."

I like detective/spy shows, and so that aspect of Person of Interest was quite enjoyable to me.  The plot of the pilot, though, was dominated by the Finch/Reese relationship, and the backstory of both men.  But this isn't just a straight-up "catch the bad guy" show; the main thing that the show wants to talk about is Finch and Reese's partnership, the nature of what they're doing, and what enables them to do it.

One thing that did frustrate me about the pilot was how it ignored huge questions of morality.  Finch is on this quest to save lives, thanks to his magic numbers, but in the events we see in the pilot, Reese ends up killing quite a few people without so much as a second thought.  If the people killed were just those who were the "bad guys," I could understand it, but one of the people killed as a result of Finch and Reese's meddling is a (fairly) innocent character who happens to be connected to the case.  Person of Interest raises a lot of very interesting questions about the morality of vigilante justice, but in the pilot, it seemed to present the world in black and white, and ignore any shades of gray.  I hope, as the series continues, that it delves into some of these questions about right and wrong; it will make the show a lot stronger.

I would also like to see more of Detective Carter--Taraji P. Henson's character--particularly because I think that interactions between the Finch/Reese vigilante team and more traditional law enforcement will force the show to address some of these bigger questions of justice and morality.  Plus, I also really like her as an actress, and would like to know more about her character.

Perhaps my biggest question about Person of Interest, though, is what it thinks its relationship to science fiction is.  Footage from security cameras is sprinkled throughout the show, often at transitions between scenes, creating a feeling of gritty reality.  But during the opening credits sequence, such clips are brought together in a collage that evokes the multi-touch screen in the film Minority Report.  Finch gets his SSNs from a machine he built that predicts large-scale disasters for the government (these numbers are events that are predicted, but too low-level for the government to care about), but the machine is treated like everything else, thus denying a "science fiction" feeling for the show.

At Comic-Con, series creator Jonathan Nolan and several of the show's actors talked about what the show was trying to do, and Michael Emerson, who plays Mr. Finch, said this:

“It seems that it will be a show where you go in thinking, ‘Oh, well here’s a piece of science fiction.’ And then after a while you’re going to have the creeping sensation that it’s not fiction at all, and that everything that’s so fantastical that we’re talking about in the show might actually already exist. And be in the hands of who? The government? Google? Someone else without a name? So, yeah, I guess it lives on the cusp of science and science fiction.”

I see how the show is trying to do this, and I think it's a brilliant thing to be talking about.  But in the pilot, this wasn't my sense of the show.  Rather, I got the feeling that Person of Interest wanted to use the devices of a science-fiction show without acknowledging that it was, and that irritated me.

I might watch a few more episodes to see if some of these things change, particularly the questions of morality and the treatment of the science-fiction aspects of the show.  But if they don't, I think I will be too frustrated by what the show could be doing, as compared to what it is, to make it a regular part of my line-up.
Posted by Jen at 1:00 PM