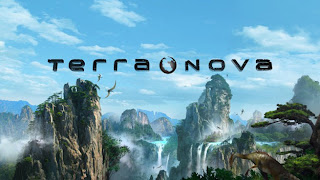 One of the new shows on FOX, Terra Nova (Mondays 8/7c), premiered on September 26.  I was initially drawn in by the premise--dinosaurs and time-travel?  Sounds alright to me!  After watching the pilot, I found the program interesting in a lot of ways, and I expect to watch at least a few more episodes, but it had its share of letdowns too.

The pilot took place in two different settings.  It began in the Earth of 2149, which is a dark, dystopian place, very reminiscent of Blade Runner.  It’s an Earth that’s on its last legs.  The air is too polluted to breathe easily, so most people wear a re-breather apparatus.  The wealthy people live in domes that simulate the way Earth used to be, but for most people, life is polluted and filthy.  FOX did a great job on the effects, and this Earth is immersive and compelling, although not terribly original.

About halfway through the pilot episode, the plot shifts to Terra Nova -- the Earth of 85 million years ago.  This Earth is compelling too, but in a very different way.  It is beautiful and natural, and there are even glimpses of dinosaurs as well, though they’re not exactly lifelike.  One of the reviews I saw wondered why Jurassic Park--a movie almost 20 years old--had more realistic-looking dinosaurs, and I'm inclined to ask the same question.

The biggest strength of the pilot episode was the plot.  It was interesting and complex, and very convincingly set up some of the major conflicts that will carry throughout the season.  I was particularly impressed with the way the mechanics of the time-travel fit into the rest of the world--a rift is open in time, which explains why a society that seems to be on its last legs and that doesn't have the technology to save its own planet can travel through time at all.  And Terra Nova doesn't exist on the Earth its citizens came from; rather, it's an Earth in a parallel world, which explains why going through the portal didn't change everything in 2149.

Unfortunately, the plot was not supported by other aspects of the show, particularly the dialogue.  The quality of the dialog in this episode ranged from “good enough” to “...did she really just say that?”  For example, upon moving in to their new home in Terra Nova, which is clean and spacious and beautiful, after having lived in dystopia-Earth for their whole lives, then being separated from each other for two years while Jim was in prison, Elisabeth and Jim (two of the main characters) have a moment alone.  During this moment, instead of hugging each other, or expressing their love, or reveling in the cleanliness and fresh air, Elisabeth says, “...we did the right thing, didn’t we?”  Um.... What?  Uh, yeah, I guess I’d have to say, “yes, pretty sure you made the right choice.”

That said, there are lots of unanswered questions that will keep me watching.  For example, what is Nathaniel Taylor’s (the commander of Terra Nova) real goal?  Is he just trying to create an earthly paradise?  Or is there something more sinister going on?  Who exactly are the Sixers and why are they fighting?  Also, why did Jim and Elisabeth Shannon have a third child and violate the 2-child policy of Earth in 2149?

All of these questions point to potentially complex subplots that have hooked my interest, and so I'll keep watching for at least a few more episodes--or at least until the dialogue takes a turn for the worse.
Posted by Jen at 3:00 AM