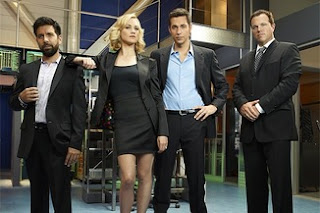 As you might know by now, I'm a fan of Chuck.  I've watched it since the beginning.  As I wrote here, I think it's more than just a fun show that refers to nerdy bits of pop culture--it's a show that has interesting things to say about the interactions between humans and technology, and how that might affect those of us in the real world.

That said, I wasn't a fan of the season finale last May, as I explained here.

And I wasn't a huge fan of the season premiere last week, either.

Some of it was well done.  As with both "Chuck vs. The Push Mix" and last season's finale, we see Chuck's ability to plan things.  While a bit far-fetched, the plan that Chuck comes up with near the end of this episode ("Chuck vs. The Zoom") shows that he is the rightful leader of this odd group of spies.  That was good.

I also liked that Chuck started talking about how it bothered him to not be the Intersect.  Sure, he wasn't talking to either Sarah or Morgan about it--the two people he arguably should have been talking to--but he was talking to Ellie, and being honest with himself, which was refreshing.

But there were quite a few things that bothered me, some big, some small.  While I realize that talking about continuity problems on Chuck is a bit of a lost cause, I feel that so much was made about how Chuck's brain was specially able to handle the Intersect (even as recently as last season) that for Morgan to be able to use it without any trouble whatsoever is a thumbed nose to anyone who has been watching for more than, say, 10 minutes. 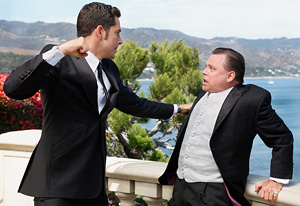 I also think Mark Hamill's guest appearance was badly handled.  So much of the fun of other guest stars has been recognizing them for who they are (were) and seeing how the show played with that.  Not only was Hamill barely recognizable, but nothing was done to play up the Star Wars connection.  Maybe this has to do with copyright laws, etc., but surely a line about how the villa's power converters are broken and he needs to go pick up some more wouldn't have been all that tough to fit in.

The biggest thing that bothered me, though, was that I don't like the way this season feels like we're starting over.  Over and over throughout the episode, Chuck would say, "We're still working out the kinks," referring to he, Casey, Sarah, and Morgan getting used to working as a free-lance spy team.  Well, I don't want that.  I like seeing Chuck be a competent spy.  I like it when their missions go well, and when everything goes as planned.  Maybe that's not the point of the show, but I've really enjoyed moving past the intial clumsiness, awkwardness, and incompetence of Chuck to someone who can handle himself in a fight, make clever plans, and get stuff done.  Based on what I saw in the season premiere, it seems like there's going to be a lot of backtracking, and I'm not looking forward to that.

Of course, I am going to keep watching--I'm intrigued by the Decker conspiracy plot line, and I want to see how the show ties all its loose ends together.  But I can't help but wish that they had found a different way to make this season exciting that didn't rely so much on "working out the kinks" and moving back to square one.