Fairy Tales, the Fantastic, and the Stage: Hansel and Gretel at Valparaiso University

This fall, Valparaiso University's theater department is performing two classic fairy tale-type works--Mary Zimmerman's The Arabian Nights, and Engelbert Humperdinck and Adelheid Wette's opera Hansel and Gretel.  The Arabian Nights was performed in October, and I was amazed at the performance.  Not only was it connected to contemporary politics in a provocative, chilling way, but the way the layers of narration were portrayed on the stage was fascinating and very well done. 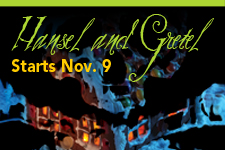 Hansel and Gretel opens this week on Wednesday, November 9th.  In a Valparaiso University press release, director Andy White talks about some of the changes he and the production team have made to this well-known opera: "We're setting the opera in an impoverished urban environment, which is a kind of forest -- except the trees are replaced with concrete and steel.  We hope to highlight the dark and powerful themes of the original fairy tale that the opera retains. Most, if not all, fairy tales tend to address in some way the aspects of the human experience that disturb us most."

Andy White also took the time to answer some of our questions about Hansel and Gretel, fairy tales, and the magic of the theater, which should be of interest to anyone who enjoys theater and fairy tale retellings.  And if you're in the northwest Indiana area, we'd encourage you to come see the show--details about tickets and show times can be found here.


In the last few years, there have been quite a few retellings of classic fairy tales--and even on the Valpo stage this year, the first two productions are fairy tales (Arabian Nights and Hansel and Gretel).  Why are these stories so appealing to us today?

Until Disney turns them into animated classics, most fairytales cause us to confront our deepest, primal fears and anxieties. Often, they are among the first stories we hear as children; thus, they become, in part, foundations of our strongest beliefs and values.

Is there something about fairy tales, and Hansel and Gretel in particular, that lends itself well to a stage adaptation?

I think that fairy tales, in general, lend themselves to theatrical adaptation because they are fantasy stories that present numerous opportunities for imaginative staging and spectacle. I don't know that Hansel and Gretel, in particular, lends itself to theatrical adaptation more than any other fairy tale. When Humperdinck and Wette adapted it in the late 19th century, their objective was to revive romanticism in German opera after the death of Richard Wagner. I believe the main reason they selected it was because it was an exclusively German national story that could be composed using a completely German musical idiom and technique. Humperdinck and Wette used it, really, as a protest piece against the "invading" Italian opera that had become so popular after Wagner's death in 1883.

In this production, you have taken Hansel and Gretel and updated the setting to an urban environment.  Were there particular challenges that you found in creating this newer version?

Well, you always have to deal with references to literal places and locations, and some references that pertain to the time in which the opera was written. It's very much like updating Shakespeare. I think one of the major challenges was conveying the city-scape as a forest. I look at it as a metaphorical forest; however, some of the sounds that are written into the music (a cuckoo, for example) are incongruent with what one would hear in an actual city. In those incidents, I hope the audience members will suspend their disbelief. But Shakespeare, himself, didn't really pay any attention to time and space in his own plays. For example, Julius Caeser is full of anachronisms, and all of Shakespeare's plays were performed in "modern" (i.e. Elizabethan) costumes. So, in Antony and Cleopatra, Cleopatra would have looked like Queen Elizabeth. That's hard to imagine in our day an age when accuracy in costuming has become the expectation. The audience, hopefully, will suspend its disbelief and see the relevance of the contemporary setting.

Are there other fairy tales that you would like to direct for the stage?  What draws you to those particular stories?

There is a Russian fairy tale called "The Snow Maiden." Tchaikovsky composed an opera version of it, and asked the great 19th-century Russian national playwright, Alexander Ostrovsky, to write the lyrics. I am very interested in staging that piece. I would be interested in staging it as a studio production with a minimal set so that the audience can participate in such a way that it imagines what isn't there.

I am drawn to fairy tales and fantasy because they are our unique mythology that answers fundamental questions about the human condition. Like the sacred stories of Genesis 1-11, they are etiology--they are true without being factual.