The Fantastic in the Fine Arts: The Work of Aunia Kahn

A few weeks ago, I came across the website of Aunia Kahn, a visual artist who deals in a wide variety of media, including tarot card design.  While I was struck by the beauty of all of her work, I was particularly drawn to her series entitled "Our Intrepid Discoveries," since the pieces in this series are based "on fantasy, and dreams."  I was even more intrigued when I learned that Aunia bases many of her figures on her own likeness; her biography on her website states, "Each work makes use of her own likeness in movie-like stills, dealing in varied taboo and often controversial subject matter to challenge the viewer, their understanding and preconceived notions; yet she connects through honest feeling and emotions."

The piece on the left, entitled "Immunity From Harm," evokes images of mermaids, Botticelli's Venus, and, with the inclusion of the trident, the mythology of Neptune/Poseidon.  But knowing that the woman is a likeness of Aunia herself brings these classical and mythological references into the present day, challenging the viewer to think about what such stories might mean in a contemporary context.

Aunia also generously agreed to answer some of our questions about her artwork:

How did you become interested in art?  Tell us a bit about how you came to be the artist you are today.

Knowing this is a cliché answer, it rings to be true; I have always been interested in art and creation. There was never a time in which I was not fascinated with making something, whether it be painting, designing jewelry, decorating my home, making tree forts, creating websites, writing for books, or running around my house singing made up songs. My brain seems to be wired for creation, and I can’t seem to live without it.
Although, as I got older, I abandoned some of my creativity to play my part in the big world of “grown ups.” Creation was here and there, but was never an important focus as it was in my younger years. In my early 20s I was thrust into my forgotten world of creativity when a part of my life became so out of control that I needed an anchor to help me begin a healing process, and art became that anchor.

After many months of constant creativity, at an addictive level where it seemed nothing else mattered, it was brought to my attention to possibly share my work publically, with galleries.  At first, the idea was upsetting to me, I could not fathom taking my private collection and posting it on some wall like a billboard for the world to look at, criticize, consume or even come to understand. Obviously not knowing much about the world of art, I was certain that my creations stood no chance to be seen.  Especially since most of my subject matter was so personal, controversial, and at times even hard for me to digest. Maybe I was just too close to my work.

Everything does have a reason for happening; even if at the time you might not know it yet, you certainly will if you’re willing to be open. The idea about showing my work was scary but somewhat appealing, since art was a part of my life I lived for and it had helped me survive. Shortly thereafter I came across the exhibit “Voices Within, Surviving Through the Arts” looking for artists, and since it felt the only “fit” for my work I had come across, I reluctantly submitted. That leap of faith started the journey that has brought me to where I am today. The mail arrived a few weeks later with an acceptance letter for the exhibition.

Attending the opening, I sat at a distance like a voyeur watching people observe my art, and talk under their breath.  Although not knowing their words I still felt like an open wound was ready to have salt poured in it at any moment.  It was grueling. What sealed my fate, in where I am today, was a lone woman who looked at the work and began to silently cry as she stood there.  That moment and many others have taught me that I have the ability to help myself and other people in a very non-conventional way.

﻿﻿﻿
You use a wide variety of different media in your work.  Do you deliberately work to do this?  Is there a medium that you enjoy working with more than others?

I enjoy many forms of art, and some of them came together to form my most notable work. There is no form that I think I like more than the other, except maybe I feel like I can handle the current medium better due to practice, but I love all different ways to create – I wish I had more time to become more prolific at a lot more things.

Fantasy and dreams play a big role in some of your work.  Why are you drawn to these non-realistic forms of representation?  Do the ideas of dreams and fantasy affect your art that doesn't explicitly portray these themes?

I dream almost every night and have as long as I can remember. My dreams are bright, vivid and very real most times, and because of the strength of them oftentimes I wake up feeling tired like I was playing in another world all night. After delving into some of the very personal aspects of my life throughout the years, there seems to be a focus on the non-realistic aspects in my newest works. Maybe because so much of my art has been hard-driven by reality, I am finding this next series pulling me away and taking me to a place that is more fun, jovial and very different from my past creations. Although no matter what I do, there is always a sense of personal realism for me. Even in past works, I have found some ideas immerging from a dream state or mediation and I have always been fascinated with the unknown or things of fantasy.

You have been involved in several projects involving tarot cards.  What is the significance of these cards for you?  Were there particular challenges in recreating a deck of cards that is so steeped in tradition?

I have always had an innate interest in the unknown, anything that is challenging to my personal notions or beliefs, and the occult.  Although tarot was introduced to me as a child, it was not until 2004 that I decided to study tarot.  Immediately I was captivated by its imagery, history and symbolism. Being a person that believes in the power of positive and negative energies and believes in the power of mind, I was unsure of how I felt about tarot. I was captivated, yet the stories that were passed on to me about tarot were ones wrapped in false accusations, such as people died using them, they are from the devil, etc., yet in in my research I found that they are nothing like this. Like anything, it’s how it’s used. You can use a kitchen knife to cut birthday cake or kill someone. It’s not the item; it’s the user. 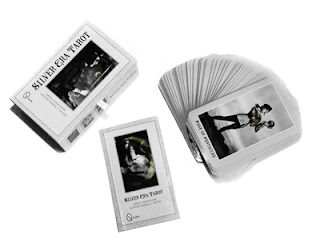 Looking further into tarot I started to understand the journey of the Major Arcana [Greater Secrets], and how the Minor Arcana [Lesser Secrets] filled in the missing pieces to a very large picture that was beautiful and magical. The decks created over the years were in the thousands, so much imagery and creation from the idea of tarot. It would be too hard to go further here about my journey into the discovery and love affair with tarot, but overall this is how I found my way into wanting to create my own journey, my own imagery, using ancient symbolism in my own style to create the deck of cards. The initial idea was to only create the Majors [23 cards], but later found I could not stop, and would continue with the Minors, to create a 78 card deck which took me about 4 ½ years to complete. Russell. J. Moon came onboard to write the companion book and took the journey with me as we created side by side, to the completion of the finished project, which became “The Silver Era Tarot”. The full deck can be found here.

Since the completion of the Silver Era Tarot, artists have complimented my ability to complete such a large individual project. Many expressed wishes that they could have done the same thing, but the lack of time and ongoing commitments seemed to prevent the vast majority. With this, the idea emerged to get some really talented artists together to work on a deck where each artist just took on one card, rather then a full deck, thus giving them the ability to explore one card to its depth and to be a part of a bigger project and journey into tarot. This is now a completed collection of artwork being published as a deck, and a full color tabletop book in 2012 by Schiffer Publishing.  The artwork and project can be found here.

Is there a piece of yours that is your favorite?  What appeals to you so much about this work?

Seriously, I could not say that I have a favorite, but I wish I could. I get asked this quite often, even from friends. Since my creations are like the children I will never have, they have things I love about them, and things that I don’t. Each has a special meaning to me; it is about where they came from, and how they were created and what I was going through at the time. They are more like time markers or journal entries being a way to document my life in a visual aspect.


All images copyright Aunia Kahn.  Used with permission.﻿
Posted by Jen at 1:00 PM