King's Cross and Riverside, Iowa: The Magical and the Mundane

A while ago, I came across this picture from King's Cross Station in London: 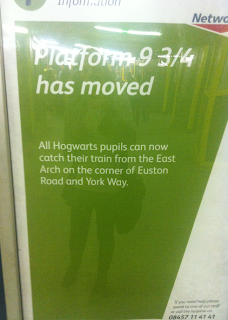 I thought it was clever and bookmarked it, and then every once in a while, would look at it again and try to figure out what I found so appealing about this image.

I also kept trying to think of other things like this--subtle references to fantasy and science fiction that appear in the mundanity of everyday life.

I think I've finally figured out what this sign reminds me of--and as a result, why I find it so appealing.

This Hogwarts sign reminds me of my trip to Riverside, Iowa a few summers ago.  Now, some of you might know that Riverside is the self-proclaimed birthplace of Captain James T. Kirk.  Not only is there a headstone marking the site of Kirk's future birthplace...

...but the city's motto has been reworked to be, "Where The Trek Begins." 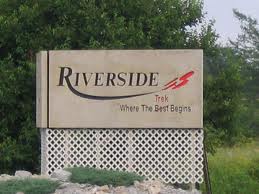 What strikes me about these examples is that they are presented as if they were just part of everyday life.  The sign about the Hogwarts Express could have been a sign about the train to Edinburgh; similarly, the Captain Kirk monument seems like one of the many monuments to presidential birthplaces.  Both take a (relatively) careful reader to recognize that something isn't quite normal--the fraction in the platform number, for example, and the word "future" in the headstone for Kirk.

And it's this idea that the fantastic could be just another part of everyday life that I find so appealing.  This idea that a hobbit-hole could be right around the corner, or that the person at the bakery might sell me a gingerbread man who runs away from me, or that the oak tree in my front yard might contain the spirit of the forest.  Seeing bits of fantasy worlds presented as if they were part of the mundanity of reality suggests to me that maybe, just maybe, these fantasy worlds actually exist.  And as a result, the world around me becomes more magical, because the possibility of the fantastic becomes embedded in everything that I see.

Sure, there are other ways of understanding what's going on in these images.  It's possible that this is just silliness and fun, a way to escape the dullness of the daily commute or the boredom of everyday life.  And there is most certainly a commercial aspect to this as well--Riverside originally came up with the idea of being Captain Kirk's birthplace as a way to attract more tourists to the annual town festival.

But there's something in the unassuming, subtle way that these images are presented that suggests to me that there is more going on here, that they are, at their core, attempts to bring fantasy into reality.  To use Isaac Asimov's phrase, these images are an escape, but they are an escape into reality.  And by bringing the magical into the mundane, suddenly, the whole world has the potential to be magical.
Posted by Jen at 3:00 AM