The Fantastic in the Fine Arts: The work of Friedensreich Hundertwasser

I studied abroad in Germany while in college, and during one weekend trip, a friend and I headed north to visit Leipzig and Wittenberg.  While in Wittenberg, we discovered there wasn't much to do once you had visited everything to do with Martin Luther, so we ended up wandering around the town a bit.  And we came across this building: 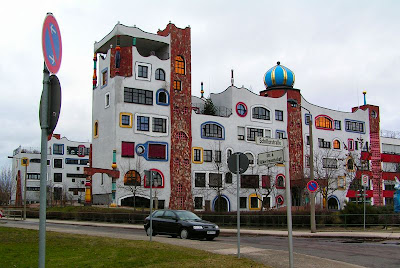 It's the Luther-Melancthon-Gymnasium (High School), designed by architect Friedensreich Hundertwasser.  It's an amazing combination of bright colors, Dr. Seuss-like shapes, and trees growing on the roof.

And while it doesn't explicitly have anything to do with the fantastic, I found the building to be magical.

A few weeks ago, I wrote about finding the possibility of the fantastic in everyday life, and I think that the work of Hundertwasser appeals to me for similar reasons.  The unexpected appearance of bright colors and crazy shapes, particularly in places that are very industrial-looking and gray, suggests the possibility of the fantastic, since what, other than magic, could have brought in such vibrant, out-of-place architecture.

It turns out that Hundertwasser was dedicated to bringing life to places that he thought were ugly; in several speeches he gave, he argued that conventional architecture was a sterile grid that imprisoned people.  The website for the Hundertwasser House (pictured below) explains Hundertwasser's philosophy in greater detail: "Die Geradlinigkeiten und die Uniformität der Bauhausarchitektur gehen ihrem Ende entgegen, denn sie ist gefühllos, steril, kalt, herzlos, aggressiv und emotionslos," which, loosely translated, reads, "The straight lines and uniformity of the Bauhaus architectural style go against their own ends, because this architecture is without feeling, sterile, cold, heartless, aggressive, and without emotion." 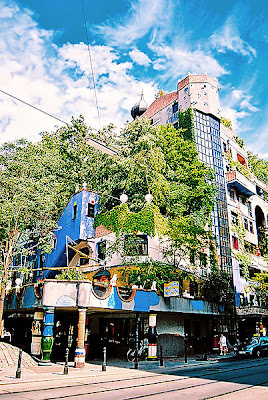 I think this explains why many of Hundertwasser's buildings seem to be in industrial, urban areas--and why the buildings that exhibit the greatest contrast to their surroundings are the ones that I am most drawn to.  The contrast between color and gray, between straight lines and curved, is a juxtaposition that affirms the infinite possibilities of life.  Take this thermal power plant in Vienna that Hundertwasser designed, for example:

The real magic of this building comes from the contrast between the function of the power plant and the whimsy of the building.  It's a contrast the suggests potential, possibility, and creativity--the very best parts of the fantastic.