When I talk about Dandelion Dancetheater, I can rarely resist comparing them to a magical traveling troupe. This is mostly not an attempt at humor and entirely not an attempt to soften the teeth of their very sharp, intelligent, and daring works of art. But, seeing a Dandelion performance is the closest thing I can imagine to stumbling across a clearing in a dark forest and finding a band of ragtag players with the skills to bring you music and dancing and theater so comfortably powerful in its strangeness that, for a little while, nothing else matters.

You have entered their world. It is an unusual one, full of dancers singing and musicians dancing and everyone playing their roles right up to the hilt with both earnestness and unflinching drama. It also invites belief, that welcome, refreshing feeling that here are people who you can trust to do good things with the time you give them.

(And isn’t that the most comforting feeling when you’ve committed yourself to a seat in a theater?) 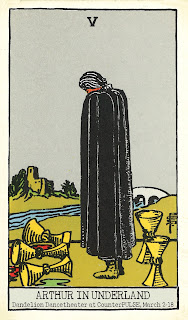 Their newest piece, "Arthur in Underland," opens on Friday in San Francisco. It begins with a band. You walk in, and there they are: guitarist, cellist, accordionist, and man on violin. The song is infectious. It picks up your feet and sets them twitching, so when a man stumbles in, all flushed with naiveté and admiration, it’s easy to imagine yourself in his skin. This is Arthur. He is in love with the band. The band that is not just a band, but somehow also a cast of characters who rifle through the tarot deck, Arthurian myth, and Alice in Wonderland for their shifting identities. They take young Arthur in hand and set him upon the expected path to coming of age. All the things one usually finds on this sort of hero’s journey are there: the loss of innocence, betrayal, lust, and misplaced, excruciating love. There’s the stumbling blindness that accompanies the discovery that you don’t know exactly who you are. There’s the hope that one day you’ll figure it out. And the entire story is told in Dandelion’s impressively broad vocabulary. Dance, words, and music are plumbed and turned inside-out for the purpose of following Arthur’s journey.

This is what I find most enchanting about Dandelion. They revel in using different mediums. They’re never coy about saying one thing in a song and then the next thing in a dance. They fully commit. Their formal training in the different areas may vary, but they move between them with confidence. It’s extremely powerful, and when a Dandelion show works, it will pretty much knock you right out of your chair.

“Arthur in Underland” is based on parts of the life of Dandelion’s director, Eric Kupers. In the program notes he describes it as “one of the most personally vulnerable pieces I’ve ever made. It is based on a time in my life that turned everything I believed and thought I wanted upside-down.” This is the story of a young man who finds his world fracturing into confusion. It’s a story about discovering your sexual identity, about darkness and self-destruction. You don’t actually need the program notes to feel the emotional honesty of this piece, but they do give you a glimpse of how Dandelion works:

“…as each ensemble member has filtered these stories through their own experiences, we’ve arrived at something I could never have predicted. In this world we’ve discovered onstage, I’ve been able to re-enter and embody the violent conflicts of my young desire, fear, confusion, and longing.”

And that is why I admire Eric Kupers and the impressive group of people—musicians, actors, writers, and dancers, all at once and to varying degrees—who make up Dandelion Dancetheater. They create work with such honesty and belief that it becomes magical. You are sitting in that clearing, in the middle of a dark forest and they are telling you a story that is keeping out the night.

If you want to see the show: