And then what happened?: The Launch of Fireside Magazine 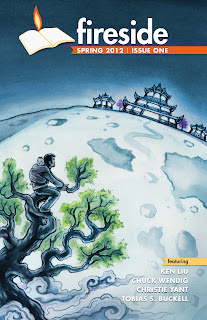 Stories are how we make sense of the world. We tell stories about things that have happened to us. (Some of them are even true.) We tell stories about where we want to be in the future. (Or at least where we think we want to be.) And we read the stories of others because those tales, the good ones, allow us to examine our own lives, to challenge our own ideas, and to laugh, cry, shake our heads, or sit on the edge of our seat, turning pages like our lives depend on it. (And maybe they do.)

But to get us to that point, stories need to be told. That's why I started my magazine, Fireside, which debuted yesterday. Last fall, a stew of ideas and discussions about writing, publishing, and Kickstarter that I had been absorbing on Twitter came to a slow boil in the back of my mind, and I thought, I want to make a fiction magazine. And I wanted to print a comic too, because there are some stories that are told so well in that format. So I started emailing writers, and artists, and smart people who could give me advice, asking them if they wanted to take a leap with me.

They did. One question I kept getting asked was, "What genre or kind of story are you looking for?" And I told them it was up to them. I just wanted good story-driven fiction, the kind I heard sitting by a campfire when I was a Boy Scout. I grew up reading and still devour sci-fi and fantasy, and I wanted that, but I also wanted crime and myth and real life and whatever else was needed to the story that writer wanted to tell. Genre frames how that story is told, but it is the story itself that moves us.

I quoted from the introduction to the Stories anthology edited by Neil Gaiman and Al Sarrantonio that came out in 2011. In it, Gaiman writes of his response to a question about what quote he would want inscribed on the wall of  the kids’ section in a public library. He captured the reason why we love good stories in his response:

I’m not sure I’d put a quote up, if it was me, and I had a library wall to deface. I think I’d just remind people of the power of stories, of why they exist in the first place. I’d put up the four words that anyone telling a story wants to hear. The ones that show it’s working, and that pages will be turned:

“… and then what happened?”

So we did a Kickstarter, and we found 254 people who wanted to hear our stories. We raised $7,000, enough to cover the cost of a small print run and of creating ebooks, most importantly, it was enough to pay the writers and artists at a rate that helps them make a living from art. The rate that is considered professional for short fiction these days is 5 cents a word, which for 2,000-4,000 words (which is what we are publishing in Fireside) is $100-$200. I wanted to try to pay more, 12.5 cents a word, which translates to $250-$500 at the Fireside lengths.

And so we got four great stories and a great comic for the first issue.  The first story, To the Moon by Ken Liu, follows the struggles of a young lawyer and the stories we tell ourselves to validate our  illusions. Next is Chuck Wendig’s Emerald Lakes, a prequel to his Atlanta Burns novella Shotgun Gravy. In our story, Atlanta is dealing out more justice with a mix of brains and blood. Our comic, Snow Ninjas of the Himalayas, written by Adam P. Knave and D.J. Kirkbride, drawn by Michael Lee Harris, and lettered by Frank Cvetkovic, is a story about why some secrets are best left unrevealed. Then we have Christie Yant’s Temperance, a story about a drunk, an intolerant town, and a mysterious woman. And we close with Press Enter to Execute by Tobias Buckell, a near-future sci-fi thriller set in a world where someone is finally doing something about all that spam in our inboxes. Amy Houser did a fantastic cover, and we had great design of both the print magazine (by Robert Davis) and the ebooks (by Pablo Defendini).

I am so thrilled with how Fireside turned out. We were able to fulfill out two goals: to tell great stories, and to pay the artists well. We'll try to keep doing it, with four issues a year. (And another Kickstarter in a few weeks.)

Fireside is edited and published by Brian White, whose day job — well, it’s actually a night job — is on the copy desk of the Boston Globe. A committed word nerd, he is also the proprietor of Talk Wordy to Me, a blog about words, editing, and other oddities. (He tweets @talkwordy.) He lives near Boston with his wife, a theatrical lighting technician, and their cat, Bast, who is most likely asleep or shredding their couch as you read this.
Posted by Jen at 6:00 AM