Late to the Party: God of War

This review was originally published on Plastiksickness on September 8, 2008.

There's hype in any game that's released. Some games have millions of dollars to advertise and go through a multi-month promotional process such as Halo 3, but others aren't so lucky and have to rely on word of mouth from game site previews and play testers. God of War falls somewhere in the middle. And then, upon the release, excitement went into high gear for an action game that was going to not only revive the genre, but also the gaming platform it was on. Releasing on March 22, 2005, God of War gave Greek mythology a new story where players were glued to their screens though an intense storyline, mixed with some superb gameplay. 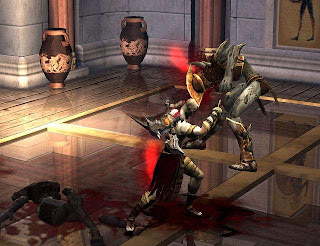 In the beginning, you are Kratos, a Spartan warrior who unleashes his carnage across the land only to find himself and his men in a predicament where he has to call upon the god of war, Ares, for help.  Giving his life and soul to Ares, Kratos and his men are saved, and Kratos becomes Ares' leading warrior.  But things take a turn for the worse when Ares tricks his greatest warrior into killing his own family--now Kratos is out to kill the god of war. There's more to the story than this, of course, and the story is something that truly shines in God of War even though most games in the action genre usually are more about the gameplay.  As you progress through the different levels that are seamless from one to the next, you'll be presented with different cinematic movies showing you Kratos in the past and how he came to be who is he today. The developers definitely took their time in creating an intriguing storyline based on the well-known Greek mythology.  It's a plotline that'll keep you entertained from start to finish over the course of the game's eight to ten hours of play time, but don't be dismayed by what would seem like a short amount of gameplay time, because with the different difficulty levels, you'll find yourself making up new strategies for different battles as you progress through the game. 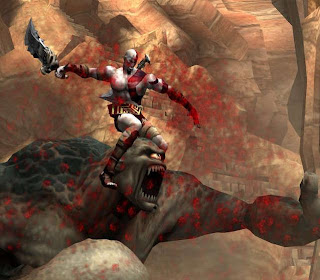 From a graphics standpoint, God of War is simply beautiful. From the different locales you'll be traveling across to the many different monsters you'll be battling against, this game looks superb, even for being on the Playstation 2. This is true from the city streets of Athens where you'll be constantly battling enemies to the massive landscapes that are spread across the screen. That's not to say that the game has expansive open areas that bring a non-linearity to the game, because even through there are some side paths, God of War is a linear game through and through.  And that's okay, because that's what you expect out of an action game. For the roughly eight to ten hours you'll spend playing through this game, it'll be rare that you won't know where to go, but it's the different artistic designs of many different areas that really impressive. The developers truly hit the nail on the head when making Greek mythology come alive. The story of Kratos and all the events you become a part of are portrayed in such vivid detail, it's almost like you read about them in a book.  There will be some screen tearing throughout your travels from beginning to end because of the limitations of the system and the impressive graphical power of the game, but this doesn't take away from your overall experience.


The sound of God of War is just as impressive as the rest of the game. Sound effects from the different powers and moves that Kratos does sound great, especially the voice acting. Both during cinematics and during the rest of the gameplay when different characters talk with Kratos, you'll be engaged because of the excellent voice acting. And you can't move through the game without noticing the musical score. The soundtrack behind the game keeps the pace and flow constant and fun from start to finish, and keeps you engaged from one battle to the next, especially during the boss battles. The developers just took their time and made each aspect of God of War enjoyable and impressive overall. 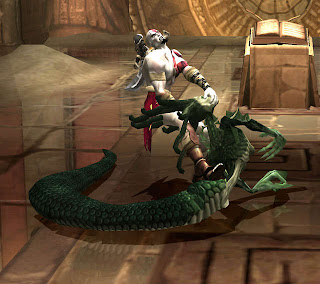 Even though it's an action game that will have you traveling along the same path each time through, the different difficulty levels do make you rely on different strategies when fighting against the many different enemies you'll be battling. The different difficulty levels do provide quite a bit of replay value overall from easy to hard--you'll definitely be spending quite a few hours with this title. With the number of different combos that can be pulled off or the multiple types of magic to spring onto your enemies, you'll enjoy each and every battle you progress through.

Overall, if you own a Playstation 2, you should buy this game, and if you don't own a PS2, you should buy one to play this game. God of War breathes new life into an aging system and proves that the Playstation 2 can still pump out great titles with the next generation systems already out. With some of the most impressive graphics on the PS2, a superb storyline, a great soundtrack, and some of the most fun gameplay to be had on the last generation system, God of War is a must-own game.

Bottom line: With impressive graphics, a great soundtrack, and some of the best gameplay on the PS2 system, God of War is a must-own for any PS2 owner and quite easily a system seller for anyone who doesn't own the last gen system.