Late to the Party: Conan

This review was originally published on Plastiksickness on September 15, 2008.

From the books of Robert E. Howard to your living room television comes Conan for the Xbox 360. In this game, players are given the chance to command one of the most barbaric men in fiction, whose story has been told everywhere from movies to comic books. Conan brings hack-and-slash gameplay, much like God of War, into your very own Hyborian adventure, but is this hack-and-slash gameplay good enough to justify a playthrough of this latest adventure game? 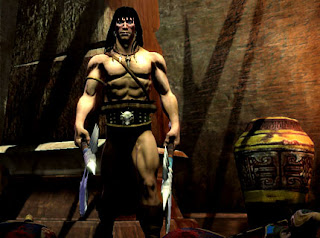 For most titles in the adventure genre, the actual storyline isn't the most memorable component of the overall game, and the same can be said with Conan. Although it's somewhat interesting at the beginning, the plotline doesn't quite explain all the details and background information that you'd probably like to know when dealing with the Cimmerian Warrior. You'll begin the game with Conan in all of his glory with all of his armor and magical powers, which for some fans of Howard's, may seem somewhat odd, due to the fact that Conan is the type of warrior who dislikes the magical dark arts--but regardless, the story must go on, right? Anyway, you'll start off as Conan searching for some valuable gem in some dark tombs, but as you're looking, you break apart a statue that releases a dark sorcerer named Graven. In the next few moments, you'll find yourself washed up on a beach with any of your armor and not knowing truly what happened. It's not exactly the general cliche of warrior without a past (although somewhat along the same lines), but a good thing is, as you progress throughout the game, you'll slowly come to learn of the background of not only yourself in the Hyborian world, but also that of Graven and the story surrounding his stone prison. As you adventure to recover your armor pieces, you'll come across raiders, dark magical beings, and creatures that would make normal men quell in fear; and along with enemies, you'll meet Akanna, a warrior queen that would fit beautifully in with any Amazon tribe. As you progress through the game, you'll help each other out. While you're trying to retrieve your different armor pieces, she also wants the same armor pieces to reimprison Graven and save the world. Although the storyline isn't the most interesting in terms of details, it helps provide a natural flowing progression of the game from beginning to end, enough to satisfy most adventure gamers. 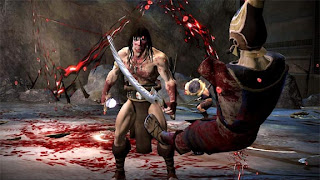 Because when you're talking about adventure games, you are mostly thinking about the gameplay, and Conan certainly does decently with the overall fun that can be had with the combat system. If you're looking for a game with gore, then look no further because the savagery expressed upon the foes of the Cimmerian Warrior is unparalleled when you carry out the correct combinations of moves. There are many different types of combat stances that can you master over the course of the game, whether you're fighting with one sword, a sword/shield combo, dual weapons, or a two-handed weapon. With a multitude of combos for each weapon style, plus the ability to do some wholesome beatings hand to hand, the combat system in Conan has to be seen as one of the best out there. After waking up on the shoreline of the beach after having your armor taken from you by Graven, you'll pull a simple one-handed sword from the stomach of a dead sailor and from there, the world is your oyster with the combat system. Throughout the different chapters of the game, you'll find one-handed axes and swords, two-handed swords, pole arms, and many other weapons that all have differences in style and grace. With each weapon stance, there are different combos that you can purchase with experience (red orbs that you pick up from dead bodies), which open up the combat even more. When following through with some of the combos, you'll come across some pretty intense finishing moves, some that completely decapitate the head from a foe, or even one, done with dual-weapons, where you easily slice off both of your opponent's arms only to see the blood gushing out the limbs. 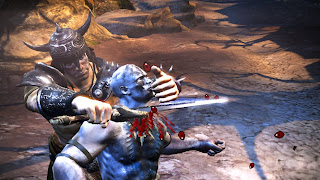 But the combos aren't the only moves that will leave your jaw on the floor from gore filled screens; when battling some foes, if you push the block button right before they swing, you'll then have the chance to push a context sensitive button flashing across your screen, that will pull of a one-hit finishing move consisting of many different animations ranging from ripping the heart from your enemy's chest to making a multitude of slices only to kick the abdomen of your opponent and see each limb go a different way--with blood gushing everywhere, of course. You'll pretty much leave each room you battle in drenched in blood, which kind of makes you smile after awhile. Much along the same lines as the one-hit finishing moves, there will also be sequences in different parts of the game or when killing a boss, where you push corresponding buttons that flash across the screen to pull off certain moves, much like in God of War. While this might be frustrating at first, you'll soon learn the different buttons and will be flying through these sequences with a little more ease, which then leaves you more time to watch the cool animations that finish off your opponent. 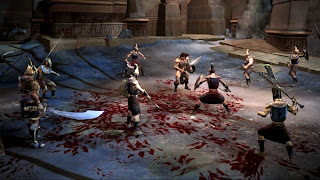 And as Conan makes his way through the game regaining pieces of his armor, it opens up new magical powers to unleash upon his foes, such as a Medusa-like stone gaze, a raining-fire spell, a power that unleashes a multitude of bats onto your enemies, and finally, a power that opens a dark void that sucks in nearby enemies. The barbaric nature of the combat moves that can be completed while in combat is what sets this game apart from the rest. Even when being attacked by archers, if you don't have a shield to block with or don't roll away in time, and you eventually take an arrow in the chest, you'll need to press a button to yank the arrow out or you'll slowly lose more health. These little details and touches create an atmosphere of barbarity that really adds to the entire Conan experience. All the combos, powers, and different moves that you're able to pull off with the different weapons give the game and its combat some breathing room, making it less repetitive, which is good, since you'll spend the majority of the game in combat and just a small fraction of the time completing some simple puzzles.

The graphics component of Conan is where the game could've used a little more work. Not the actual look of the game, but some of the graphical glitches and mishaps that could've been taken care of before release. The different environments look great from the start when you wake up on the beach and walk into the jungle setting, or when you'll come across little huts or small little settlements of your enemies. These will make you feel like you're in a true Hyborian setting right out of Howard's book. All of your enemies are modeled well and the boss models, whether it's just a small raider or the huge undead elephant, look particularly nice in combat. Models for Conan and Akanna are especially well done (as are the nearly naked maidens you encounter later that will call out for you to save them, and, once you rescue them, will thank you rather, um, promiscuously).  But some of the glitches come up when the cutscenes begin--some of your weapons seem to disappear when a cutscene begins and then reappear when it's over, for example. Or you're battling an enemy and back him into a wall and he's actually battling from 'inside' the wall. Not huge mishaps, but certainly hitches that could've been completely eradicated through a longer development cycle.  Another graphical misstep to note would be that the camera can sometimes hinder your movement while in combat or out adventure, but as with all adventure games, the camera angle always comes into play.

Sound wise, the game is decent enough. Ron Perlman voices the part of Conan, and while that may seem like a great choice, throughout your travels, it'll just seem like he didn't put everything he could into it. Some parts seem like he's pushing the words from his mouth, and this can take away from the story element of the game. While it's not terrible, it could have been just a little better. Other parts voiced throughout the game, such as Graven and the Warrior Queen Akanna, sound great and really drive the game forward. Sometimes though, you'll hear some of Conan's punchlines repeated too closely where it takes away from the wittiness of the actual comments. On the other hand, the orchestral score sounds great throughout each and every locale and during the big boss fights. Whether you're decapitating an enemy or maneuvering different puzzle pieces, you'll be pressed onward with a great musical score that really captures the barbaric adventure from beginning till end.

Replay value for Conan is decent, whether you're pushing for the numerous achievements that consume most of your combat throughout the game or trying out the different difficulty settings. Once those two objectives are complete, though, it's hard to tell who would come back to Conan--but then the same can be said about God of War and multitudes of people, including myself, could easily go through that game again, strictly for the combat system.  And that combat system just may be Conan's saving grace in the replayablity factor. One thing that might hinder the various playthroughs is the time spent loading. One would think, with having a next-generation system such as the Xbox 360 and the fact that the game is split up into levels, that the load times would be pretty decent, but for some reason, you'll be spending more time than usual between levels.  Even if you've just died five steps from a checkpoint, the load will always be the same. And this loading will seem even more time-consuming with the final boss battle because of how frustratingly hard it can be.

Overall, it's a decent action/adventure game all around. With a decent storyline, some of the best combat, and decent graphics and sound, Conan is a game that can be enjoyed by a lot of people, fans of Robert Howard's fantasy setting or not. With a fully fleshed-out combat system that rivals the like of God of War, and with a decent enough story starring the Cimmerian Warrior everyone loves, Conan is a game you should spend some time with, particularly since it only takes around six to seven hours to complete the entire game.


Bottom Line: With great combat, good graphics and sound, and a decent storyline, Conan is a game you should run through at least once.