The Fantastic in the Fine Arts: The Yerkes Observatory 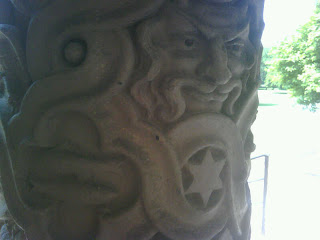 My school, the University of Chicago, likes to compare itself to Hogwarts. So it shouldn't have been a surprise that our astronomy department features some truly fantastic architecture.

When I visited Yerkes Observatory in Wisconsin (but part of the Chicago astronomy department), I enjoyed the detailed carvings into the pillars outside; the fantastic signs of the zodiac blended in with simple stars and an unidentified man. (There were stone hornets stinging his nose that had to be carved away, given the possibility it might have been a bygone University president!)

There's a sense of whimsy throughout the building--some people working on the roof of the room containing a huge telescope left an inflatable Spider-Man up there. 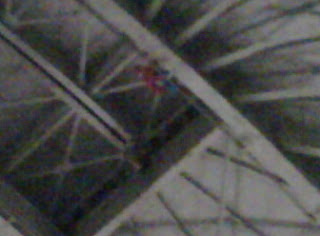 And a small, white dome with its own little telescope outside is known as "Sirius B"--because it's a white dwarf. 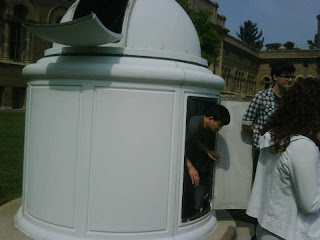 Even beyond the architecture, spending the night at Yerkes put me in mind of the fantastic. I used to be secretly jealous of fictional characters who had adventures I could never hope to emulate—making friends, sneaking around magical old buildings, finding secret libraries, bringing flashlights down to see all the cool gadgets in the basement, being scared by spooky noises in the basement, and stargazing from the roofs. But after visiting the observatory, fantasy and reality seem a lot closer together.