Judging a Book By Its Cover: The Summer Tree

I find myself in a peculiar position writing this iteration of "Judging a Book by its Cover." All of my other articles have included either books I was entirely unfamiliar with or books reprinted with wholly new covers I had never seen. The Summer Tree, however, is a book I know quite well. And as any astute and savvy Guy Gavriel Kay fan knows, the authorized site Bright Weavings has amassed a considerable gallery of international book covers. So rather than approach the article in my usual way, I’m going to pick the covers that I thought provide thoughtful interpretations on the story and showcase them alongside applicable descriptions from the text. 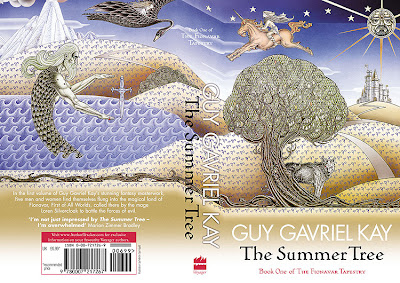 “It’s so great,’ he said. ‘So tremendous. Why’d they put him under something so beautiful? Now every time you look at it, you have to think about…’ He trailed off. Words were too tough, sometimes. Most of the time.

Torc was looking at him with sharp understanding, though. ‘That,’ he said softly, ‘is why they did it.’ And he turned back to the lights.” (Kay 272)

The first cover I have chosen provides perspective in that it effectively disregards it; the style is intended to echo a real tapestry. Most main characters are intentionally not depicted, which I think is a wise choice. There is a tendency in the cover art to focus either on the actions or scenes of Paul or Kim, which while understandable, undermines the quality of the Tapestry’s brilliance as a true ensemble piece. Kay’s work introduces a host of spectacular and visionary creatures and settings, and this piece contrasts them brilliantly. The two figures in the air, for example, could not be more polar in nature.  On the right, Imraith-Nimphais, the flying chestnut unicorn, bears its rider Tabor. The rapport the unicorn and Tabor create is both part of Tabor’s coming of age and one of deep sentiment and unconditional love. On the left, Avaia, the swan, is taking the captured Jennifer to Starkadh. It is a beast of evil, of putrefaction and hard edges, reflected in Springett’s linework (Imraith-Nimphais’s figure curves and curls pleasingly; I for one actually like the fact that she is depicted without wings because I think it works better within the dimensions of the piece).

Another opposition couples the castle on the right, Paras Derval, with the mountain-prison, Ragat, on the left. Paras Derval, the palace at Brennin, is a bastion of relative safety. Ragat, described in the passage above, is not only a prison for the villain Rakoth Maugrim but eventually creates a visually striking gesture of fear, illuminating the sky with a massive fiery hand after Rakoth escape from imprisonment. It is hard to see it in the picture provided, but the posters Springett sells hold the image in its entirety.

The last contrast I’d like to note is between two critical scenes from the book that have been featured at the middle ground of the composition on each side. On the left, the figure gesturing with the dagger is Eilathen of the Lake, who teaches Kim about Fionavar through his own supernatural weaving abilities. While the ring on his finger and the dagger he bears are of significance to the tale, Eilathen cares not for their abilities since, as he is bound to guard them, they are in effect symbols of his own imprisonment. While ostensibly Eilathen would not want the Unraveller to come to power, his allegiance is only to himself after he is freed. On the right beside the tree is the wolf Galadan, a character that actively wishes to stop Paul from finishing his time on the Tree. Unlike Eilathen, Galadan has vested interests in the outcome of the coming war and is motivated by a mixture of vengeance, anarchy, and nihilism. Note that the tree’s trunk spreads its tendrils across both halves with its thread, marking how the Summer Tree pervades the entirety of this first novel of the Tapestry. One of the bigger themes to the Fionavar Tapestry is freedom: the ability to be free and the freedom to choose. The back cover’s symbols are those of captivity, while the figures of the front involve a break from restriction, choice, and potential redemption.

Martin Springett discusses other elements of the creative process at length in his essay on the Bright Weavings website. 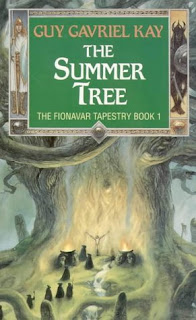 “Very great it was, dark almost to black, its trunk knotted and gnarled, wide as a house. It stood alone in the clearing, in the place of sacrifice, and clutched the earth with roots old as the world, a challenge to the stars that shone down, and there was power in that place beyond the telling.” (Kay 165)

John Howe’s depiction definitely takes the text to heart. The tree is tremendous, an awe-inspiring structure with a girth comparable to the largest known cypresses and redwoods. The lighting and arrangement of the trunk create the perfect atmosphere of ritual, reinforces its role in the book as a god-touched place, and highlights one of the other major themes of the books: that of sacrifice. There is an eerie synergy between man and nature created in the space: it is unclear how the large clearing was created, how the tree trunks just happens to arch enough for a man to walk through or a stream to cross, and how certain moss-covered blocks jut above from the trunk in a manner befitting a graveyard. The only strange aspect to me is that there seem to be too many people at the scene; I don’t think there are ever that many visitors at once. Nonetheless, the composition sends the eye on an adventure through the tree’s twisting branches and through the exquisite details of the trunk-space. The actual cover version pairs a member of the lios alfar with a svart alfar on either side of the title text. 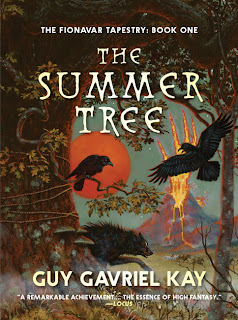 “But the moon could not rise. It was the dark of moon, new moon night. The last crescent had saved the dog the night before. Had saved him for this. They were waiting, the Godwood, the whole night was waiting, coiled like a spring, but there could be no moonrise that night.
And then there was.
Above the eastern trees of the glade of the Summer Tree, there came the rising of the Light. And on the night of the new moon there shone down on Fionavar the light of a full moon. As the trees of the forest began to murmur and sway in the sudden wind, Paul saw that the moon was red, like fire or blood, and power shaped that moment to its name: Dana, the Mother, come to intercede.” (Kay 230)

Wurtz and Maitz' cover is actually part of a wider illustration that encompasses all three books. Like Springett’s cover, foreground and background are critical to fitting in all the necessary elements of the piece. Wurtz and Maitz have a more traditional go at perspective and it allows them to incorporate miniature details like Galadan’s coat or the leaves and moss of the tree. In the background, we can see riders on a plain. Hopefully they’re meant to be Dalrei, since their culture is a portion of the book that cover artists seem to ignore; I’m happy to see them represented, even distantly. The hand shooting into the sky is much more visible in this image, and it’s effectively the brightest aspect in the work. The hand and the moon frame the ravens, Thought and Memory, to give the black of their silhouettes some eye-popping contrast - a thoughtful visual choice. The ravens are relevant to any depiction of the Tree, as they are part of Paul’s story/interaction with Mornir. The mountain and moon, the main opposing forces of the composition (and arguably the book) provide an other-worldly light to the image and most definitely evoke a sense of summer, fire, and blood. The portrayal of summer becomes important, as it is part of the overall effect the artists have rendered in the larger version of the three-book illustration: a transition through seasons as the image goes from left to right. 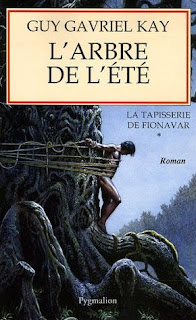 "The Tree was a part of him now, another name, a summoning. He almost heard a meaning in the breathing of the forest all around him, but his mind was stretched and flattened, he could not reach to it, he could only endure, and hold the wall of memory as best he might.” (Kay 186)

“…he was beginning to hallucinate. Colors, sounds. The trunk of the Tree seemed to have grown fingers, rough like bark, that wrapped themselves around him. He was touching the Tree everywhere now. Once, for a long spell, he thought he was inside it, looking out, not bound upon it. He thought he was the Summer Tree.”(Kay 195)

“He was becoming root, branch. He was naked there, skin to bark; naked in all the ways there were, it seemed, because the dark was coming down inside again, the door unbolting. He was so open the wind could pass through him, light shine, shadow fall.” (Kay 222)

Jacques Lamontagne’s vision of Paul hanging from the Tree is a striking arrangement of light and dark values and shadows. The original artwork has a slightly different color filter on it, which allows the viewer to see the gnarled faces and expressions that are inherent in the tree trunk; they are subtle and, along with the roots which reach out like fingers and branches that shoot jaggedly like blades, decidedly unsettling. Many depictions of the tree leave Paul out of direct view, but Lamontagne features him front and center – in fact, most of the French language covers do. His body is rendered with a visible sheen of perspiration under the indiscernible light source (the god-rendered new moon, perhaps?), and his body language is one of definite anguish - willingly invoked, an essential element of Paul’s character. He is someone who is haunted and withdrawn, and the image of the tree suits him, since Paul has a will as deeply rooted and immovable as its trunk.

Editor's Note: If you are a fan of Guy Gavriel Kay's work, please join us for our discussion of The Summer Tree in our online book discussion group, Fantasy Matters Reads!  We've extended our discussion until the middle of July, and we'd love to hear your thoughts on the novel.
Posted by Jen at 6:00 AM