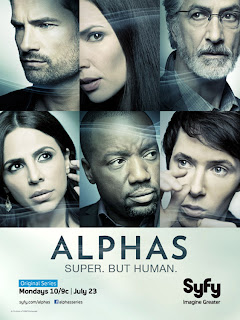 I need to start this review of the Alphas season premiere with a disclaimer: I didn't watch all of last season's Alphas, mostly because I didn't have cable and it wasn't available online.  As a result, I'm not necessarily the best person to judge how well the premiere of this second season fits in with earlier storylines.  But I can tell you that even thought I hadn't seen the first season, a quick look at the Wikipedia entry for the show and the what happened last season" retrospective that opened this episode were really all I needed to catch me up to speed.

So, with that disclaimer in mind, here's what I thought of the premiere:

In general, Alphas tells the story of psychologist Dr. Lee Rosen and a group of five people, named Alphas, who have extraordinary abilities.  Dr. Rosen serves as the leader for this group as they try to use their abilities to stop crime.  Last year ended with Dr. Rosen broadcasting the existence of Alphas to the entire world, and as a result, the team is split up and he is incarcerated in a special mental hospital.

I continue to like the same things about the show that I liked about it last year--namely, the Alphas that make up the are real people with real problems, not superheroes who can do anything.  Yes, they have abilities that extend past what you or I would be capable of, but these abilities are extensions of what a normal person can do, not completely impossible abilities.  Rachel, for example, can heighten one of her senses; Bill Harken can activate his "fight or flight" response on command.

I also really enjoy how the members of Rosen's team depend on each other--something that is made very clear in this first episode of the season.  At the beginning of the episode, Rachel has shut herself in her room, Harken and Hicks are bumbling through crime-fighting operations, and Gary is missing.  By themselves, each of these Alphas is barely getting by, and their talents are going to waste.  But at the end of the episode, thanks to the efforts of Dr. Rosen, the group is back together, communicating with each other, and, most importantly, helping each other use their talents to the best of their ability.  It's not a show about spectacular individuals, really--it's a show about flawed, talented individuals who perform better as a team.  It is also in the interactions of this team that the episode's funniest line (involving dogs and hummus) occurs, which makes them all the more enjoyable as a group.

One of the concerns I had after watching this premiere is that the group of "bad guys" it introduces seems to change this treatment of Alphas.  Their talents seem to be more along the lines of "impossible" rather than "extraordinary" (setting people on fire with bare hands, for example), but even worse, they don't show the need for each other that Rosen's group does.  Sure, they are able to accomplish more when there are more of them, but they don't demonstrate the same realistic weaknesses that make Rosen's team so appealing.

In terms of the plot of the episode, it was different from the standard fare of last season, but still fairly predictable.  Instead of the "meet a new Alpha, see what she can do" format from last summer, this episode used a different, yet similarly predictable structure--"all the group members are scattered, we need to get them back together."  It set up the rest of the season well, though, establishing an "us vs. them" tension that should create a narrative arc for a good part of the season.

The one thing that did throw me for a loop, though, was Rosen's daughter Danielle.  I know that she was introduced last season, but I don't know what we learned about her.  In this premiere, we learn that she, too, is an Alpha, who is able to help take away the mind-numbing effects of the drugs Rosen is forced to take while incarcerated.  She comes across as very sympathetic, which is why the very end of the episode was quite surprising to me.  (No spoilers here; you'll have to watch this on your own.)  I'm interested to see this relationship developed more; the very little that we know about Danielle speaks volumes about some interesting story waiting to be told.