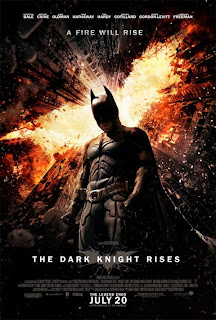 The third installment in Christopher Nolan’s incredible Batman trilogy, The Dark Knight Rises, can be summed up in one word: intense!

Nolan’s final vision for the caped crusader is one of the most poignant takes on the (in)famous comic book vigilante and hero, and it is an apt look into possibly the most realistic fantasy story based on the Batman to date.

Comic book movies face fierce scrutiny from legions of super hero fans that treasure the decades of riveting fiction from the books themselves, and though Nolan carves his own path with The Dark Knight Rises, it is clear that he has carefully chosen classic Batman storylines to use as a backbone of sorts for his beautiful masked creation.

Like a few of the greats (Tarantino comes to mind), we have to wonder if director Nolan will ever make a film that is anything less than spectacular.

The Dark Knight Rises takes an ominous and dark overtone from the very opening scenes and does not let up.  Suspense, intrigue, and tension fill nearly every corner, though the film is not entirely without some great comic relief from its top-notch cast, like Morgan Freeman’s character of Fox who gets in quite a few pokes at his boss Bruce Wayne.

The acting here could and certainly should demand Oscars, from Christian Bale’s versatile and varying performance as Wayne and the Bat, Tom Hardy’s (Bane) brilliant look into love, madness, and sociopathic scariness, and Michael Caine’s heart-wrenching (and show-stealing) look into the butler/mentor/parent of Alfred.

Caine’s scenes where Alfred is trying to instruct and protect his adopted child, in Bruce Wayne, are utterly emotional and invoke the times when a parent or loved one is terrified for their child. Be warned that tears might swell in response to such amazing acting, as we can all relate to these scenes.

The writing is tight, the thrilling action nearly overwhelming, and the terrorized citizens of Gotham are rendered with clarity and finality as Bane proves to be the Batman’s unforeseen adversary, foil, and equal.  The world building is both gorgeous in its visual aesthetic and filmography and frighteningly realistic, invoking an intensity that leaves moviegoers gripping their knees tightly throughout much of the two and a half hour epic production.

The only downside is the bitter sweetness accompanying The Dark Knight Rises, because we know that it is a somber conclusion to a masterpiece, and we will all miss clambering for years in wait of the next Batman picture that will wow us.