The Fantastic in the Fine Arts: Fireflies

I went camping this past weekend, and while the weather was way too hot, it did mean that I got to see fireflies--something that don't always appear in Minnesota.  As I was sitting near the campfire, watching their twinkling lights, I couldn't help but think about how they looked magical--like tiny fairies, preparing for a dance, perhaps.

Photographer Michael Flomen has created a work of art that captures some of this magic that surrounds fireflies: 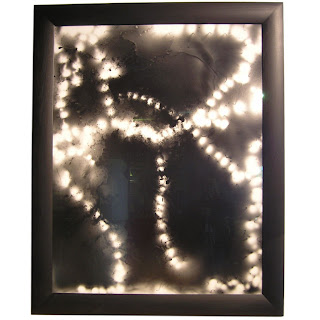 The writeup for this piece, which is available for sale over at 1stdibs, describes this same sense of the fantastic:

In his large format, exquisitely printed and beautifully framed black and white photographs, Michael Flomen reveals otherwordly landscapes that seem to chronicle a visit to the Moon or journey through the Milky Way. Transfixed, standing in front of one of these large and luminous images, one becomes lost in an infinite universe. There are horizons and hollows in a land one could only imagine. White is black, and black is white.

But, it turns out, this is not a picture of the Milky Way.  Rather,


But these are REAL images of fireflies, made with a large 8x10 inch camera, and brought to completion in the artist's darkroom. Fireflies light up Flomen's work to an exalting effect. He freezes the movement and the form of a firefly on photographic paper with alacrity, and creates a seductive fantasia of the heavenly firmament, with web-like traceries of pale fire left on the face of the deep.

It's a beautiful photograph that captures the magic, effervescence, and mystery surrounding fireflies.

Of course, when I Googled "firefly art," a very different kind of artwork appeared in my search as well.  For you Browncoats out there, enjoy!
Posted by Jen at 1:00 PM