The Struggle to Survive

Next week marks the launch of Shay West's Portals of Destiny series, starting with the first novel The Chosen.  Today, we welcome a guest post from West in which she talks about one of the alien races in The Chosen--the battle-driven Volgon.

“Fighting to survive” is not something many people have ever had to face. It’s a terrifying idea, really. Having to literally fight in order to live.

Now, this could be fighting circumstances, weather, or even other people. What sorts of things would we be forced to do, what actions would we take? What if one led to the other? The list could go on and on.

In my Portals of Destiny series, I explore this issue on the planet Volgon. This alien race is reptilian in nature. Very large and very strong. They have been at war with the Gorkons for many centuries, so long that none of them even remember why the heck they are even fighting. The battles have left Volgon scarred and battered, lifeless and desolate. The Volgons moved into underground colonies that are well-hidden from the enemy and heavily fortified with shields. All energy is devoted to the survival of the Volgons that are left alive after the terrible battles. With little to no resources, the Volgons are forced to make some tough decisions in order to survive. 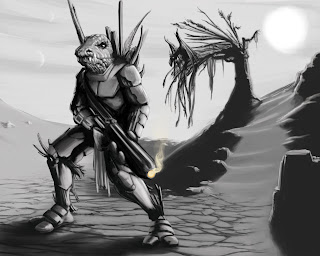 When resources are slim, decisions must be made as to how those will be divided up. For a race dependent on fighting, this means devoting everything to survival: weapons, armor, shields...and food and water rations being given to the strongest in the colonies.

This has led to a race of beings bred to be strong and fit. But this has also led to a race that abhors anything they consider weak or sick or deformed, those they see as being unfit for life since they can’t possibly be of any value.

But would humans be any different if thrust into the same situation? Would we try to find a way to divide resources among everyone still alive or would we make the choice to give such precious rations to those that are the most valuable at the time? I’m not sure there is any right or wrong answer and there certainly isn’t an easy answer. Perhaps this is one of those that can only come about when we are faced with it (which we can hope will never happen).

The Volgons are born to fight. They are large, muscular, have greater energy and tenacity than even the strongest human you can think of. They are fearless and consider dying in death to be the greatest honor. The Chosen from this planet will be crucial in the battle with the Mekans. But what will happen when this race encounters other Chosen from other worlds? Will the Volgons be able to look past physical appearances and accept those they consider weak and useless? You’ll have to read The Chosen and the rest of the Portals of Destiny series to find out!