Stories that Punch You in the Gut: An Interview with Ben Loory

Today, we are very pleased to bring you Megan Kurashige's extremely entertaining interview with Ben Loory, author of Stories for Nightime and Some for the Day.  Enjoy! 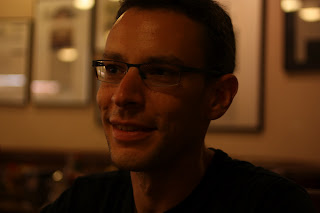 MK: My first remark is: you're splendid. I met you for the first time in a bar in a hotel in San Diego. Let's pretend we're conducting this interview in similarly festive environs, instead of via email. What does this imaginary establishment look like? Drink of choice? What sort of music is piping through the place?

BL: For some reason I picture us in the middle of the Lincoln Tunnel, during rush hour, with the cars stalled all around us. We're sitting at a little table with a white tablecloth on it, which a waiter has carried out and set up for us like in that scene in Goodfellas. I am drinking a Guinness, probably out of a can, and you have something blue with an umbrella in it. No, I mean a full-size umbrella. And there's a talking horse standing over to one side singing "I've Gotta Be Me," but we're ignoring him.

Stories For Nighttime and Some For the Day is a collection of short stories. Since there are a nice number of them, and since this is your first book, I assume you have an affection--or predilection--for the form. What draws you to short stories? What qualities, in your opinion, make for a good one? Do you ever find yourself with a story that grows beyond short story length? And, what do you do then?

BL: Well, it's true that I write short stories-- often very short stories-- but in my mind, I don't really differentiate between short stories and novels, or novellas and novelettes, or plays, or screenplays, or movies, or epic poems. What I'm interested in is storytelling itself, in Story, whatever the length or medium. As a reader, what I look for is an original vision, attached to an emotional rail. I tend to think of stories as mechanisms or incantations... as spells designed for the transformation of consciousness. Basically, I'm an Aristotelian. I'm looking for catharsis and resolution.

As for why I write short stories... I don't know, that's just what comes out. I think I just like it when things grow in your mind, as opposed to shrinking in retrospect. I wouldn't be opposed to writing something longer, but it would have to have to be longer. I don't see any reason to make a story longer just so it can be, you know... longer.

MK: Strange things happen in your stories. But, for the most part, they happen with deadpan seriousness or unsurprised wit. How do these ideas occur to you? Do they arrive in dreams? Pop out of nowhere? Are they symbols or ciphers, or just the way things are in your head? What draws you to the odd and fantastic?

BL: When I write, it's kind of like dreaming on the page, at least in the early stages. I always sit down blank, with no ideas or preconceptions, and just start with the first image that comes to mind. That image is always therefore somewhat mysterious (as I have no idea where it comes from or why), and so then I have to invent a character to interact with it so I can figure out what the hell's going on. So my stories are always examinations of their own premises-- which is what all stories are, I guess. It's just that mine begin in near-absolute mystery, and unfold in worlds where physical laws are poetic.

As for what draws me to the odd and fantastic... what can I say? I don't like being bored.

MK: I think "The Duck" is my favorite story in SFNASFTD. I have read it, listened to it on the radio, and had it read to me by someone I'm fond of. It punches me in the gut. Which of your stories evoke the strongest reactions in yourself?

BL: All my stories punch me in the gut; I wouldn't publish anything that wasn't hard for me to face. Some of them of course are more difficult than others... there are a few I've never even been able to read in public because I know I'd never make it through them: "The End of It All," "The Ferris Wheel," "The House on the Cliff and the Sea," and "Hadley" come to mind. (Somehow I do manage to read "The Well," though I often have to pretend I'm somewhere else, frolicking in a field, near the end.)

MK: You live in Los Angeles and have worked as a screenwriter. How have these most likely connected biographical facts influenced your work as a writer?

BL: I owe pretty much everything I do to screenwriting, because it forces you to think of stories in terms of structure. You don't get to hide behind the crafting of sentences, you have to constantly face the conflict and work your way through it-- because in screenwriting, there is nothing else. It also teaches you to think in visual terms and to always, always be externalizing.

As for Los Angeles, it's a strange place... it's a transient dreamworld populated by dreamers, with a grand, ghostly history, but little feeling of solidity. I don't think I'd be able to write the way I do if I lived in, say, New York. There's too much reality, too much stuff going on; you have neither the time nor the privacy to dream properly. If I lived there I'd probably be writing about drugs and puking in alleys behind bars.

BL: Writing for me is just pure intensity. It's like jumping off a cliff or being blasted into space. The feeling I get when I launch into a new story is the most exhilarating feeling I've ever found. That being said, I also love playing music, and could easily see doing that full-time. The difference to me is that when you play music, you're playing with other people, so there's a give and take, a sense of community-- it feels safer and more joyful, but not as batshit crazy totally-on-your-own fuck-the-whole-wide-world FREE. Writing is complete freedom... and then it becomes work. After that first burst is over, then the hard part sets in, where you have to figure everything out and make sense of it all, and make all the pieces fit together. And that part's fun, too, but is the opposite of being free. It's like doing archaeology or something-- dusting off bones and photographing and cataloging and examining and thinking and turning and trying and sweating and getting hot and angry and pissed off in the sun... but at the end of the day, you get a great sense of satisfaction (if you manage to figure it all out), and, also-- if you do it right-- you always learn something you didn't know about yourself.

The only bad part of writing is dealing with publication. And even that part isn't really all that bad.

MK: What makes you decide that a story works? Is this when you finish it?

BL: I know the story works when I get to the last line and suddenly burst into tears. That's my test. Logistically, I think it has to do with the inversion and synthesis of the conflicting story desires. But I only know I've actually done it when it feels like Death has walked into the room.

MK: I have a kind of obsessive curiosity about something. I always like to ask authors about this... How does a story form itself while you're writing it? Do you see it in your head? Do you hear it? Does it just march along in a parade of letters across the page?

BL: It kinda feels like something that's actually happening-- it's live and dangerous, like a dream that I'm both having and (semi-consciously) directing-- but at the same time it also unfolds in front of me like a movie or an animated cartoon. What it never feels like is words on a page-- I don't even see the words when I'm writing. It's sort of like being a wartime reporter, typing furiously, trying to capture the insanity.

MK: What is the last wonderful thing you read/listened to/watched/looked at?

I watched this Spanish movie called Timecrimes the other day, which has about the dumbest title I've ever heard, but I really loved it! I think maybe they just didn't know how to translate the title well, or maybe they were trying to make it sound like a Michael J. Fox movie or something, I don't know. Anyway, it's a very quiet, very smart, very stylishly done comic-thriller about impulses and the choices that make up a life. It was written and directed by some guy named Nacho Vigalondo, who I've never heard of but imagine I will a lot in the future. It's kind of like if Pedro Almodóvar made a science fiction film, only minus the high heels (which is maybe its one failing).

I also recently discovered the Argentinean writer César Aira, and have been working my way through those few of his 50+ (!!) published novels that have so far been translated into English. They're all really short, around 100 pages apiece, and just blisteringly imaginative and fun. If you have a moment, I highly recommend Varamo, which had my brain spinning wildly for almost a week afterward, or An Episode in the Life of a Landscape Painter, which is maybe even better, if quieter and less free-wheeling.

Listening-wise, I'm still stuck on the Melvins, and doubt that will change anytime soon.

MK: What are you working on now? What Ben Loory projects can we hope to anticipate with great and unbridled eagerness in the near future?

BL: I've been working on a children's picture book with the Penguins, which will be out from Dial Books for Young Readers sometime in the next year or so. And of course I'm writing stories all the time, and getting together a pair of collections. We'll see!

By Megan Kurashige
Posted by Jen at 10:00 AM