The Hobbit: The Unexpected Critical Reviews 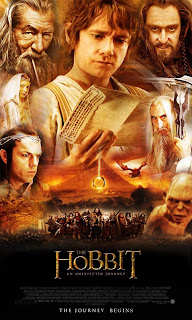 Editor's note: This past weekend, two of our regular contributors went to see Peter Jackson's movie version of The Hobbit--and both were inspired to share their thoughts with us.  Given the epic nature of the film, we are running both reviews: one Wednesday and one today.  After reading both, you can then contribute your own thoughts to this conversation about the season's most fantastic film.

Also, we will be taking Monday off to enjoy the holidays with friends and family--but we will be back on Wednesday, December 26, with new art and thoughts about some of our favorite scifi/fantasy works from this year.  Merry Christmas!

Update: Since writing this review, Mark Schelske has amended his review of The Hobbit; you can find his updated thoughts in the comments on this post.

When seeing Martin Freeman as Bilbo Baggins on the cover of my wife’s Entertainment Weekly, I had to read Lisa Schwarzbaum’s review of The Hobbit: The Unexpected Journey.  She gave it a B+.  Sounds good, but please understand that this magazine is notorious for grade inflation.  Its A for The Master is the reason I saw that movie which, with absolute certainty, I believe to be the worst movie of 2012.  So I worried a B+ for The Hobbit might not be good.

This led me to check Rotten Tomatoes on opening night, December 14, 2012.  The grade became much worse.  A 65% approval rating, a solid D.  I browsed the rotten ratings and found a disconcerting litany of despair:

Christopher Orr - The Atlantic:  "It frequently seems as though Jackson was less interested in making The Hobbit than in remaking his own fabulously successful Lord of the Rings series."

Peter Rainer - The Christian Science Monitor:  "My first thought in watching The Hobbit was:  Do we really need this movie?  It was my last thought, too."

Richard Roeper - Richard Roeper.com:  "There’s no denying the majesty in Peter Jackson’s visuals but he’s taken a relatively slim children’s book and stretched it beyond the limits."

My local newspaper reprinted a review by Roger Moore of the McClatchy-Tribune News Service  and he gave it two and a half stars, a D-.  He sums up the movie as “bloated” and lambasts the fan base as being in denial when he states, “The hard core faithful won’t admit it, but less cynical studios could have told this entire tale in three hours.”  Ouch.  So much for needing three movies.  Moore ends with a biting declaration, “Even Shakespeare needs editing.”

I went into the theater on the defensive.  Was I about to experience another Star Wars: The Phantom Menace?  I cast out that horrific thought and decided to take the criticism with a proverbial grain of salt.  Since I own the special expanded Blu-ray edition of Return of the King at 263 minutes, I concluded that these critics would also accuse this 4 hour and 23 minute masterpiece as “bloat” and stretching “beyond the limits.”

I consoled myself that the critics were ignorant.  Any true fan wants Peter Jackson to expand The Hobbit’s storyline to include the 120 pages of appendixes from Lord of the Rings, right?  Surely the audience will want to know what Gandalf does when he disappears on an errand in the book version of The Hobbit.  So why not include that visit with the White Council of Galadriel, Elrond, and Saruman (who appear in the LOTR trilogy) and hear them discuss the Necromancer (who, of course, evolves into this giant evil eye)?  Any true denizen of Middle Earth will want to see the inclusion of Radagast the Brown, hardly mentioned in the book, but another key player in setting the plate for Lord of the Rings.

But alas, after seeing the movie what ran through my mind were the words, “the hard core faithful won’t admit it...”  O.K.  I admit it.  These critics have valid points.  The extras have caused a narrative dissonance by overshadowing the essential Bilbo Baggins storyline.  The movie is The Hobbit, not The Two Wizards (Gandalf and Radagast) or Return of the Dwarf Prince (Thorin Oakenshield).  Baggins is cast as part of an ensemble, rather than the lead.  He needs to be the lead.

The movie is at its best when Bilbo encounters Gollum.  The exchange of puzzles, the hilarious reactions of Bilbo to Gollum’s split personality--this is the critical cinematic moment that needed expansion, but instead a majority of the time is spent with the goblins chasing the dwarves.  I couldn’t help but think I had seen this all before in the Mines of Moria.

And the goblin king.  That’s where “bloat” is an accurate term.  Instead of being a terrifying monster, he looked like a fat freak.  I expected the goblins to be menacing, or to at least have the deep voices of the 1977 animated version.  Those goblins towered over the dwarves and were larger than the wargs they rode on.  They could stuff Bilbo in their massive mouths and tear him apart with those boar-style tusks; Jackson’s goblins, however, are the underwhelming size of the dwarfs and have high pitched squeals - with the exception of the obese goblin king who for some reason speaks in perfect English.  I actually miss those 1977 cartoon goblins with their sinister voices singing, “Fifteen birds.”  That song captivated me as a seven year old:


In Lord of the Rings there is no mention of goblins, but it is my understanding that orcs and goblins are the same.  Though all goblins are orcs in The Hobbit, not all orcs are goblins.  Which is how Jackson can swap the goblin chase into the woods with a different chase by a pale orc who has it in for Oakenshield.  Again, another expanded storyline.  And I’ll just say, Jackson tries to give the prince the heroic valor of Aragorn, and Thorin is no Aragorn.

In conclusion, I believe the problem for this movie is one of execution.  The Hobbit narrative is lost in order to make to make the movie a prequel for Lord of the Rings.  Perhaps Jackson should have stuck with Bilbo Baggins as the focus, and inserted the extras in the Blu-ray version.

With Lord of the Rings, I give it an A+ on my grading scale, but as much as it pains me, I must agree with Entertainment Weekly this time.  The Hobbit is a B+.