Unexpected Connections: Safety Not Guaranteed and Indiana Jones and the Last Crusade

I watched Safety Not Guaranteed over the holidays, and I loved it.  The film tells the story of a  newspaper intern--a young woman named Darius Britt--who is researching a story about the following newspaper ad:

Wanted: Somebody to go back in time with me. This is not a joke. P.O. Box 91 Ocean View, WA 99393. You'll get paid after we get back. Must bring your own weapons. Safety not guaranteed. I have only done this once before.

Of course, the key question of the film is whether or not the man who posted the ad--Kenneth Calloway--can actually travel through time, or if he's just crazy.

This question comes to a head in the final scene of the film, and in this climactic moment, I was reminded of a very different film--Indiana Jones and the Last Crusade.

At the end of Safety Not Guaranteed, Darius runs to find Kenneth, worried that something has happened to him.  She reaches their prearranged meeting place and finds him in a boat that appears to have the potential to be a working time machine.  She apologizes for not being truthful about the story she was writing, and Kenneth tells her, "Then get on."  There is a moment where she hesitates, 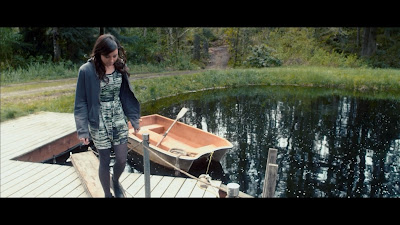 but then, slowly, Darius begins to walk the plank board onto the boat. 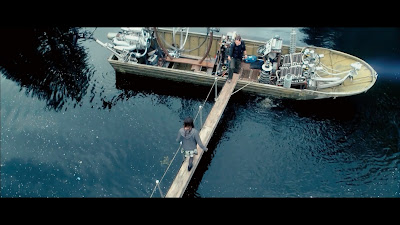 I won't spoil what happens next, but for me, it didn't matter--the fact that Darius chose to believe that Kenneth actually created a working time machine was the high point of the film.  Her faith in him, in the impossible, was beautiful and inspiring.

I see a strong connection to a similar moment at the end of Indiana Jones and the Last Crusade.  Indy is rushing to find the Holy Grail in a desperate attempt to save his father's life, and all of a sudden, he reaches a seemingly impassible chasm:


Like Darius, Indy chooses to believe in the impossible, to step out into nothing and take a chance.  Interestingly, both choices involve stepping out onto a thin plank, creating a very striking visual similarity between two otherwise quite different films.

What I love about this connection, though, is more than just the connection in imagery--it's the similar worldview that both films endorse.  Both of these movies embrace a world in which the impossible is possible, where events defy rational explanation, and where life doesn't always makes sense but it's celebrated anyways--and for me, that's the true beauty and potential of fantasy literature.

By Jen Miller
If you enjoyed this article about unexpected connections in fantasy and science fiction, check out Madeline Barnicle's earlier article in this series.