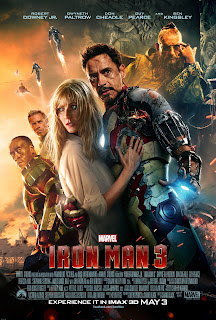 Editor's Note: In response to Jen Miller's post about the first Iron Man movie, Mark Schelske recommended that she see Iron Man 3.  Today, we run his review of that film.

Iron Man 3 is pure popcorn without all that fake butter and high sodium.  Unlike the previous movie, which caused high cholesterol, this movie is nutritious.

Tony Stark is suffering from the adverse affects of his past adventures, so he is forced to make himself a better man, a healthier man.  Yet a villain stands in his way - the Mandarin.  I thought I’d hate Ben Kingsley as this bad guy terrorist.  Let’s just say he proved me wrong.  Moreover, Robert Downey Jr. as Stark and Gwyneth Paltrow as Pepper Potts continue their chemistry.  I even liked Don Cheadle’s performance as James Rhodes.  His character, the Iron Patriot, had some laughs, unlike the flat performance in Iron Man 2.

The highlight of the plot is Extremis, a regeneration therapy.  It can grow back missing limbs, but it is unstable.  I wish the writers had done more to flesh out (pun intended) this storyline.  This leads to my one gripe: there wasn’t enough background about why the Mandarin’s Extremis soldiers would choose this treatment over their other loyalties.  Their treason seemed over the top.  But if you can overlook that flaw, the movie has the same fun appeal as The Avengers.

I liked the setup at the end, but when it comes to the fireworks display (you’ll know what I mean when you see it) I thought it was an incredible waste, even though it tied in to the larger meaning of Stark becoming a healthier man.

One gets the real sense that for Iron Man to achieve personal wellness, he has to make a disciplined set of choices rather than get an easy fix with technology.  That blows my mind.  This is, after all, a superhero whose life is devoted to tech solutions.  I’m not used to a popcorn flick giving me such a healthy choice.

I recommend Iron Man 3 for anyone who enjoyed the first movie, or enjoyed Thor for that matter.  You get to see the trailer of the thunder god’s next movie, and I, for one, can’t wait.