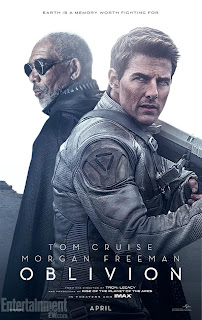 The marketing for Oblivion did this movie a great injustice.  Malcolm Beech (Morgan Freeman) is seen talking to a captured drone tech, Jack Harper (Tom Cruise).  And this simple scene gives away a major mystery developed at the beginning of the movie.

Why release commercials that ruin the viewing experience?

From the start we learn that aliens invaded the Earth, but humanity won the war with nuclear weapons.  So in the year 2077, the survivors must find a new home after the nuclear holocaust.  Water from the oceans is being sucked dry and then sent to the orbiting space ark known as the Tet.  But some aliens still survive on the surface.  They are known as the Scavs.  Unmanned spherical drones are deployed to destroy the Scavs and protect the machines that harvest the oceans.

In a couple of weeks Jack and his lover/teammate Victoria will complete their drone repair mission and then rejoin humanity on the Tet. Then the survivors will go to a colony on Titan with Earth’s remaining resources in toe.

Jack and Victoria literally live on a home base in the clouds, presumably to avoid the radiation zones.  When Jack makes his repair runs, he flies a ship which looks like two of the spherical drones attached to a cockpit.  It’s visually stunning to see Jack fly through clouds, storms, and across an altered landscape.  A visit to New York is like Planet of the Apes with the iconic Statue of Liberty almost buried to its head.  In this movie, entire buildings are buried to their tops.  The Empire State Building’s observation deck is now at ground level.

Yet, the filmmakers and marketers, in their irrational wisdom, give away the secret of the Scavs in the advertisements.  What a dumb move.  Moreover, the audience is treated to some lazy scriptwriting with another repeated Hollywood ending.  And for this reason I have no qualms about being the spoiler:  Oblivion is just another ripoff of Independence Day.  It’s the same gripe I had with Avengers.  A superior alien force invades, but Robert Downey Jr.‘s Iron Man takes them out with a single nuclear weapon.  We’ve seen this before.  Jeff Goldblum and Will Smith take a nuclear bomb in a captured alien vessel to blow up the Independence Day mother ship.

I think Oblivion could have held its own as original science fiction.  It had all the elements to be the best sci fi movie since The Matrix, but it turned out to be a letdown.  The film industry needs to the quit churning out movies that ultimately prove to be just another Independence Day.