Only Shades of Gray Under the Dome

I loved reading Stephen King's Under the Dome, a novel that tells the story of a small town in Maine that is one day inexplicably cut off from the rest of the world by a giant transparent dome.

I also loved teaching the novel.  In both instances, I became completely immersed in the world of the novel, marveling at the intricacies of imagery, narrative structure, and literary allusion.

And so, when I learned that CBS was planning a TV series based on the novel, I was thrilled.  I thought that the TV format would provide the time and space to explore the interwoven plots and character threads.  And even though the novel takes place in a relatively short amount of time, shows like 24 have shown how effective TV can be at filling an entire season with a very brief chronological time period.  It seemed like it had a lot of potential.

The series premiered last night, and in the opening shot of the show, I was filled with hope that my expectations would be fulfilled.  Take a look: 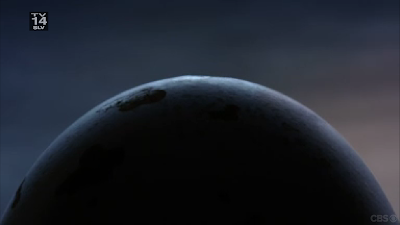 I think this image is fantastic.  Right away, it suggests the curvature of the Earth in a way that alludes to the omniscient narrator of parts of King's novel.  It also functions as foreshadowing, as it looks like the dome that will eventually cover the town of Chester's Mill.

But, as the camera pulls back, you realize that it's neither of these big-picture things.  Instead, it's a tiny bird's egg that's about to hatch: 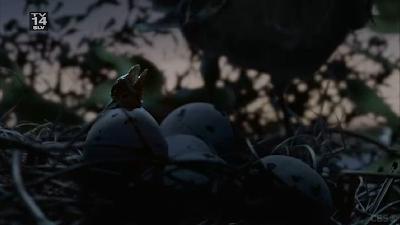 In this single, opening image, the creators of the show visually represented what was at the heart of King's novel--the interconnectedness between microcosms and macrocosms, between the minutest detail and the universe as a whole.  Big and small are intimately intertwined and, it might seem, are even the same thing.

[Book and TV show spoiler notice: I will talk about the first episode of Under the Dome as it compares to similar events in the novel, but the show reveals things at a faster pace than the book does, if you haven't read that yet]

After this image, however, I became much less excited about the path the show was taking.  Lots has been changed from the novel, particularly in the depictions of the novel's main characters.  Big Jim comes across as less of a complete jerk--he doesn't have the noticeable accent and affected language that he does in the book (and particularly the audio version of the book), Barbie is much LESS sympathetic, as we first seem him burying a body in the woods, and Junior is given a moment of normalcy before he turns into a complete psycho.  The characters I knew and loved, or knew and hated, are all blended together, made more gray instead of black or white.

Now, I realize that no movie or TV adaptation will follow the original text exactly, and quite frankly, I don't think they should.  Visual arts are different from literature and can offer a fresh artistic perspective on the story.  And one of the things that my class noticed when we read Under the Dome was that a lot of the characters did seem rather firmly established as "good" or "evil"--there wasn't a lot of internal character development in most of the characters.  This was especially noticeable in Big Jim, who didn't seem to be given any redeeming qualities in the novel.  So perhaps changes that blur these lines between good and evil will make the show more interesting and give it greater long-term potential. That said, I do miss the Barbie that I could cheer for without hesitation.

Some of the character changes, however, I am less comfortable with--particularly the decision to make Julia Shumway younger and married.  I'm interested to see if there's a real reason for this choice, other than just a general prejudice against older women in Hollywood and the thought that a woman gains legitimacy only by being paired somehow with a man.

There is also less of a sense of community in the TV show than there was in the novel.  The novel gave you a great sense of interconnectedness between the characters--how they all were coming from the same place, how they were invested in their town, how they all knew each other, and how they were all in this together.  And while several characters on the TV show repeated, "We're all in this together," you don't get that same small-town feeling.  Joe McClatchey (who is Joe McAlister in the show) and Benny Drake are best friends in the novel, but don't even really know each other at the beginning of the show.  And Norrie Calvert, a girl in the novel whose family has lived in Chester's Mill for three generations, has been replaced by Norrie Calvert-Hill, a girl from LA on her way to camp--in other words, an outsider.  Julia, too, is an outsider--she says that she has just recently taken over running the paper, rather than having been working there since she got out of college.  Given how important the theme of "us vs. them" was to King's original novel, I wonder how well that theme can play out when no real "us" is ever established.

Finally, I also got the sense that everything was figured out way too easily in this first hour-long episode.  Although the dome is less permeable in the TV show--no sound or radio waves can make it through, unlike in the book--the residents of Chester's Mill much more quickly figure out what is going on.  Jim Rennie has the presence of mind to broadcast a radio message ordering everyone to stop driving out of town.  Joe McAlister even starts thinking about a generator.  Given the enormity and unprecedented nature of the catastrophe, I found this coordinated, focused, rational response to be a bit unbelievable.

In other words, I'm not sold yet.  I think some of the changes to King's original novel are definitely for the best, but it remains to be seen whether this show will be an artistic vision that can stand on its own, or merely a shadow of the original.