The Left Hand of Star Trek Into Darkness 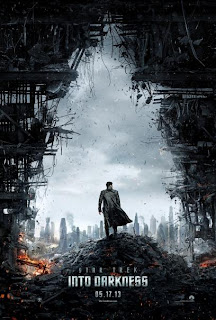 Friends, Romulans, Vulcans – lend me your ears. I come not to bury Star Trek Into Darkness, but to praise it.

When JJ Abrams reinvented the Star Trek franchise by creating a new film with an offshoot universe, did it tick off Trekkies? Yes, the die-hards, but the masses came to see it – and it was a success.

When a cast of then-mostly unknown actors took on roles that were familiar to audiences for over 40 years, were there howls of protest? Yes, but the acting and the characters soon won over the masses, and soon Star Trek new and old was back in the spotlight -- and it was a success.

When a sequel was announced, and then took four years to bring to the screen just so that the crew and cast could get the elements right, was there frustration? Yes, but it paid off with a script that paid tribute to a lot of Classic Trek while varying the storyline into something entertaining.

When the guest cast was announced – a cast of genre fan-favorites, including Peter “Robocop” Weller, Noel “Mickey from Doctor Who” Clarke, and Benedict “Sherlock/Voice of Smaug” Cumberbatch, did people take notice? Of course.  When people said, “do not read spoilers,” did people listen?  Yes, and to their satisfaction when they saw events unfold onscreen.

The script for Into Darkess is far more solid than the first film, the acting is top notch (in particular Zachary Quinto, who has made the role of Spock his own, Chris Pine, who becomes Kirk without steering himself into Shatnarian satire, and Karl Urban as Dr. McCoy, who seems to be channeling the late DeForrest Kelley), and the effects, while bountiful and breathtaking, do not overwhelm the film the way some effects-driven films recently have. The film has a new design for Klingons, an uber-Tribble, and many tropes that classics Trek fans will find familiar. OK, so there’s some gratuitous stripping down by Carol Marcus in a shuttle, but no one complained about the gratuitous stripping down of an Orion girl in Kirk’s bed the first film, because that’s what’s expected, right?

A review on Salon negatively puts the film on the same slam-bang action genre as The Avengers or Iron Man 3, and Wired dissected the script (and Carol Marcus) to show what it could have been how it paled to Classic Trek. I’ll make no “Bones” about it, a lot more pathos could have been wrought by restructuring the story and refocusing on Kirk’s characterization after setting up certain elements about his lack of humility at the beginning.  And it’s hard to argue the point about Classic Trek’s philosophy missing from the mix (though it’s stronger here than in the first film). It’s pointless to speculate what could have been—it’s a fun but pointless exercise, full of sound and fury, signifying nothing.

There are those who say that the film is JJ Abrams’ demo reel for the Star Wars franchise—that the opening scene of a planet’s native tribesmen chasing Kirk and McCoy, as well as a bookending scene set in a warehouse, are suck-ups to Indiana Jones, and the scene where Kirk and several crewmembers evade a Klingon patrol through wafer-thin canyon crevasses (in a disc-shaped ship, no less) is a clear imitation of the flight of the Millennium Falcon through the Death Star in Return of the Jedi. But the events in Trek are organic to the story and are surely nothing more than homages, if that – is this ambition? Abrams says he initially turned down the Star Wars franchise and had to be persuaded to take it, but would still stay true to Trek -- and Abrams is an honorable man. (However, Orci, Kurztman and Lindeloff gave us  Transformers and Prometheus—so are they all honorable men?)

Wait—if the film is so stellar, then why is it not performing as well at the box office?

Um….second films in series usually don’t do as well as the first?

Perhaps it’s the title. Star Trek Into Darkness? Will the next one be Star Trek Over the Rainbow? The monicker  doesn’t help – I mean, when the Empire struck back and Indiana Jones ventured into the Temple of Doom, people were shocked and dismayed by the, well, darkness. A Scanner Darkly is one of Philip K Dick’s best novels, but the adaptation did not do as well as say, Total Recall. So it has something to do with darkness. Yes, that must be it.

Perhaps fans who thought (from the first five minutes of the film) that they would be getting a story about the repercussions of Kirk’s actions in breaking the Prime Directive on a primitive world were upset that they were not getting a film about “Planet of the Mafia” or “Planet of the Nazis.” Perhaps they weren’t expecting a Star Trek story featuring a crazy admiral.

Perhaps science is to blame—or lack thereof. Perhaps fans were turned off by the filmmakers’ apparent lack of understanding about zero gravity. Perhaps fans are upset about how an ensign who is merely shadowing the ship’s Chief Engineer can take over said Engineer’s duties. Perhaps fans didn’t like the fact that Kirk pages Scotty on a hand-held communicator while he is in the Beta Quadrant and Scotty is at home on Earth (thus rendering Uhura’s job meaningless). Perhaps fans are frustrated with how Scotty performs an “R2-D2” and deactivates an enemy ship’s weapons—after somehow getting onboard the ship by himself in the first place.

Ok, now that I think about it, I’m starting to see the validity of the criticism—the reason for such hatred and words. O judgment, thou art fled to brutish fans, and filmmakers have lost their reason. But I can get past it and accept this new adrenaline-filled mass entertainment Trek while knowing that Classic Trek, TNG, Deep Space 9 are still out there.

Ah, Trek—you all did love it once. What cause withholds you then, to mourn for it? You want action, gratuitous sex, and stories that make no sense – there’s always Enterprise (and some would add Voyager). Fans didn’t give up on those right away, and the new film Treks surpass those. If the only thing the new film franchise does is entertain, so be it, but it has also renewed awareness in a series that was ailing as it approached 50 years; now the films have opened the floodgates of interest and the atmosphere is ripe for a for a TV show revival, which is where talk seems to be right now.

Like the rest of you, my heart is in the coffin there with Spock. And I must pause til it come back to me – Trek as we know it will be back, so enjoy the current ride, even if it is without “Spock’s Brain”--  you should know from that episode that you can’t keep a good Vulcan down.