Impulsive Review of the film The World’s End 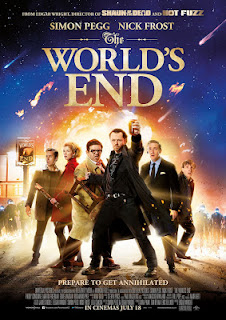 The World’s End . . . IS THE END . . . of the hilariously excellent Edgar Wright-directed Cornetto Trilogy, starring Simon Pegg and Nick Frost.

Laughs and entertainment are riddled throughout this science fiction flick, and there is more action thrills here and funny falls than in the last two movies combined.

There is a fabled pint of beer waiting at The World’s End pub, and to achieve it, multiple Matrix-like fight scenes are hurled at the group of five childhood friends returned home.

The disillusioned Gary King, played by Pegg, has one aspiration: to relive the glory of his late teenage years and finally finish the pub-crawl to end all pub-crawls.

King is the wild eyed fearless leader with selective memory – who is never ever wrong – and who has changed very little over the twenty years since his band of friends began to grow up and get careers. He is a raging alcoholic still looking to live free and party incessantly, and comes across as utterly conceited as a rock star. Simon Pegg portrays this almost polar opposite to his nerd persona brilliantly.

Alongside King is his former best friend Andy Knightley, who is the straight man and a stark contrast to the former characters that Nick Frost has played. He proves to make for some of the funniest bits of the film, as the serene and subdued Andy begins to show signs of losing his cool (and he thrills with great fighting moves taken from comic books and pro wrestling legends); Frost has never been better.

While the five childhood friends traverse their hometown of Newton Haven to take on the Golden Mile and drink down twelve pints from twelve pubs in a single day, some force seems to have invaded and changed their beloved Mile for the worse.

The themes of camaraderie, us vs. corporations, freedom vs. imposed rule, and man vs. himself are strong and powerful, bringing a lot of serious undertones and drama to the unique film. The World’s End is very funny but is a lot more than a genre comedy and it is quite exceptional.

As talent is everywhere in this movie, it comes as no surprise that Martin Freeman is one of the pint-pounding quintet of friends. He is a character and a funny one at that, as he is very much married to his wealthy position as an uptight estate broker for millionaires turned wild.

For those unfamiliar with the Cornetto Trilogy of films:

The Cornetto is an ice-cream brand that thematically shows up once in each of the three comedies, from the Strawberry flavored Cornetto in 2004’s zombie comedy Shaun of the Dead, to the Original blue wrapper Cornetto in 2007’s Hot Fuzz buddy-cop comedy, and then the Mint Chocolate Chip one in 2013’s grand Cornetto finale The World’s End.

Co-writer and co-star Pegg has stated publicly that this is the last of the Wright, Frost, and Pegg collaboration . . . that takes place in England! So it is an end of sorts for the extremely talented trio, but they will explore the myriad possibilities of writing and creating films together in other places and varying circumstances in the world.