Monday Fun: Looking Forward to the 50th Anniversary of Doctor Who 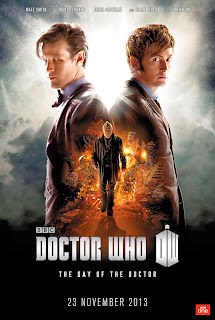 Happy Monday everyone!  Now that it's October, we are quickly approaching the 50th anniversary Doctor Who special, entitled The Day of the Doctor.  This episode is scheduled to air on November 23, but so far, the BBC is playing things very close to the vest in terms of letting viewers know what's going to happen in the episode itself.  A special trailer was aired at Comic-Con, but that hasn't been released to the general public.  The BBC did release a post-production still last week, which you can find here, but that's about it.

Of course, all this secrecy is only making Doctor Who fans that much more excited to actually see the episode, especially since we do know that it will feature the return of David Tennant and Billie Piper, in addition to starring current Doctor Matt Smith and his companion, Jenna Louise Coleman.  And the BBC is doing all they can to generate excitement with extra Doctor Who-related content--this press release details the documentaries, radio programs, and fan contests that are scheduled to lead up to the anniversary episode.

And, although there are no publicly-released trailers for The Day of the Doctor that contain footage of the actual episode, there are of course trailers with footage from previous episodes that build up to the question: Doctor Who?

But in perhaps the most exciting Doctor Who news of the week, it was revealed that over 100 Doctor Who episodes from the 1960s that had been presumed lost, had been discovered in Ethiopia.  After these episodes (featuring the first two Doctors William Hartnell and Patrick Troughton) first aired, the BBC wiped or lost the original copies; now, copies of these episodes have allegedly been found at the Ethiopian Radio and Television Agency.  The BBC has not yet confirmed this discovery, though they have announced a press conference that seems like it has something to do with this news, given that invitations to the event were sent out that looked like 1960s-style television sets.