The Way of Kings: Where Is Its Magic Going?

Over the past two years I have read a large amount of Brandon Sanderson: the last three books of the Wheel of Time, the Mistborn Trilogy (plus The Alloy of Law), Elantris, Warbreaker, and most recently The Way of Kings, which is the first rather large installment of the Stormlight Archive, an estimated ten novel fantasy series currently being written by Sanderson. All of these books (excluding Wheel of Time) contain worlds built in the Cosmere universe, which shares a common mythology. This mythology does not (at least yet) play a large role in any of these books, where each world contains its own unique magic system and is self-sufficient without the overarching Cosmere mythos. In fact, the mythology for each world typically takes a back seat to the magic system; just as Tolkien once wrote that “the invention of languages is the foundation” of his works, so is the invention of magic systems the foundation of Sanderson’s works.

Sanderson’s magic systems are almost always hard magic systems (see "The Physics of Magic" for some of my ramblings on that), and so when reading Sanderson I constantly see parallels between his magic systems and physics. These connections range from the strong reliance of Allomancy upon Newtonian mechanics and a somewhat modified version of electromagnetism in the Mistborn universe to the weak allusion between quantum chromodynamics and the magic system of BioChromatic Breath in Warbreaker. In many ways Sanderson uses the physics, or at least logical structure, of the magic system as foreshadowing, rather than the portents and prophecies used by most fantasy authors (although he does also use those). Consequently, now when I read a novel by Sanderson, I always keep a wary eye on how the magic system develops.

Of all the completed works by Sanderson I have read, the fullness of the magic system is always revealed by the conclusion of the book or series. However, The Way of Kings is only the beginning of the Stormlight Archive and so much of the magic system remains unexplained and unexplored. This of course gives us an excellent opportunity for rampant speculation, but rather than make a fool of myself by providing conjectures that inevitably will be wildly off mark and forever available on the internet, I would like to examine two examples of connections I particularly noticed between physics and the magic system of The Way of Kings.

The first example is from one of the interludes of the book which follows two monks (which here are called ardents), Ashir and Geranid, and their study of spren, which are small creatures that are associated with various things in the world. For example windspren accompany wind, flamespren are found near flame, deathspren are seen (allegedly) by the dying, and rotspren are found about infected wounds.  Ashir and Geranid study flamespren which dance around erratically with varying length, shape, and luminosity (these are Geranid’s variables, not mine), and discover that when one of these variables is recorded in writing, the flamespren freezes in place. After the written measurement is erased, the flamespren resumes its sporadic movement.

Seems rather like quantum mechanics, doesn’t it? The rules are slightly different, but the core concept is the same: there is inherent randomness which cannot be described by hidden variables, and the physical properties of a system are influenced by the act of measuring as performed by an external observer. Here the analogue of the flamespren within quantum mechanics is the wave function for a particle. By Heisenberg’s uncertainty principle, if the position of a particle is precisely measured, then its velocity is not, and vice versa. However, unlike in The Way of Kings, the measurement does not need to be written down; it just needs to be made. I’m not certain what the connection between flamespren and quantum mechanics will mature into in the remainder of the Stormlight Archive, but I do have a feeling that the connection is important.

The second example is actually not from the magic system, but rather from a direct introduction of cold hard physics into The Way of Kings. Here, a monk is attempting to convince a scholar that a supreme being must exist. The monk does this by taking out a metal plate, sprinkling sand on the plate, and then vibrating the plate with a bow similar to those used for stringed instruments. The sand then creates a geometric pattern, dependent upon the frequency of bowing, which matches the geological formations of four large cities within The Way of Kings world. The argument from the monk is that such an underlying symmetry indicates a higher being.

Here is an excerpt from the scholar's notes on this topic: 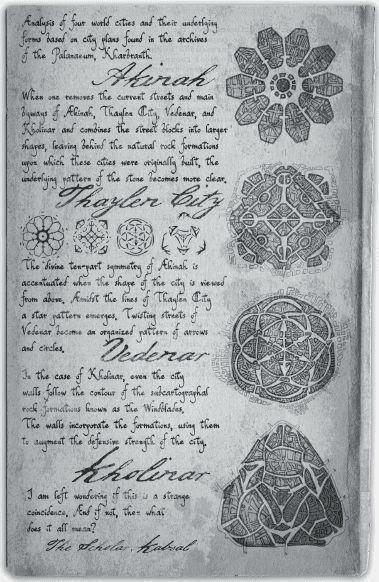 The text of this excerpt reads as follows:

Analysis of four world cities and their underlying forms based on city plans found in the archives of the Palanaeum, Kharbranth.

When one removes the current streets and main buildings of Akinah, Thaylen City, Vedenar, and Kohlinar and combines the street block into larger shapes, leaving behind the natural rock formations upon which these cities were originally built, the underlying pattern of the stone becomes more clear.

The divine ten-part symmetry of Akinah is accentuated when the shape of the city is viewed from above. Amidst the lines of Thaylen City a star pattern emerges. Twisting streets of Vednar become an organized pattern of arrows and circles.

In the case of Kholinar, over the city walls follow the contour of the rock formations known as the Windblades. The walls incorporate the formations, using them to segment the defensive strength of the city.

I am left wondering if this is a strange coincidence. And if not, then what does it all mean?

These patterns (although not the specific ones given in the book) arise from standing waves produced within the metal plate. The standing waves have nodes, where the plate is not moving up or down, and the sand is vibrated into these stable nodes, creating geometric patterns which depend upon the standing waves, which in turn depend upon the frequency and type of bowing applied to the plate. The study of visual phenomena, produced from sound waves, is cymatics, and this particular example with a bowed plate is called a Chladni figure. These patterns were first discovered during the late 1600’s and helped advance the physics of classical wave theory. For those who are interested, a more quantitative demonstration of Chladni figures using Wolfram’s Mathematica is available here, and a video showing some of the possible patterns can be found here (although I suggest muting unless you enjoy listening to high pitched tones).

So how will the Chladni figures of the major world cities connect to the Stormlight Archive magic system? Again, I have absolutely no idea, but just as for the case of the flamespren, I’m certain it will be important and hopefully over time Sanderson will reveal all. In some ways waiting for the remaining books of the Stormlight Archive reminds me of the wait (which I did not personally experience) between the proposal of the Higgs boson in 1964 and its discovery (more or less) in 2013. Hopefully Brandon Sanderson’s timeline will move slightly faster than one book every forty years.