Judging a Book by Its Cover: The Freedom Maze

The cover art to The Freedom Maze

is powerfully composed. Questions immediately spring to mind: Who are these women? Or girls? Why aren’t their faces visible? Why are their styles of dress so distinctively different? 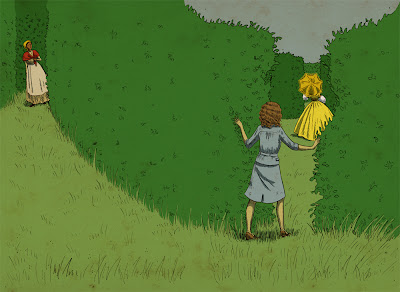 The posture of the girl in the foreground is worth a look. She doesn’t seem like she’s in hot pursuit of the girl in yellow, and her body language doesn’t express desperation or anger. She looks forward more in wonderment, or in a position of exploration. The composition also reinforces the structure of the maze walls. While shrubbery obviously doesn’t have the permanence of concrete, it is enough to make a person feel boxed in. It necessitates immediate, polarized choices: forward or backward, left or right, staying or going.

If we look at the entire composition, not just the front of the book jacket, we see that there’s another character on the far left of the cover. Fully visible, she has a look of curiosity – a guarded one, given her hand clasping her shawl in front of her, but curious all the same, since she’s still leaning towards the space in front of her, one full of possibilities.

The woman in yellow seems like the only one who is walking without hesitation, and with a definitive direction. Yet she is also the most mysterious, since a parasol obscures her.

The Freedom Maze is being labeled as a Young Adult book, so one might argue that the three women could represent stages of growing up – the leftmost girl has cautious curiosity, the girl in the foreground is exploring and learning, and the girl in the background with the parasol knows what she wants and where she’s going. Then again, I knew that the book was about time travel before I started reading, so the idea of past, present, and future could also be at play, despite the most modern clothing belonging to the girl at the present/center of the image. These are potentially representations of stages of understanding as well, given the racial issues inherent in a book where a character is sent back to the 1860s American South.

The connections among the cover figures are certainly illuminated upon finishing the book. Unsurprisingly, the girl in the foreground is the main character, Sophie, who is from the 1960s and dressed accordingly. She is endearing and relatable as a main character, not quite feeling as though she has a place and identity of her own. Given that she has an absent father, domineering mother, and literally at least a century’s worth of familial expectations weighing down on her from her mother’s side, we can’t really blame her. Which makes it understandable how quick she is to wish to be spirited away to the past thanks to a rather Cheshire Cat-like spirit.

Sophie is indeed sent to the past for an adventure, yet the goal of her transport is not readily apparent. She is quickly mistaken for a bastard slave child and sent to work with people she has had little to no contact with, people she has even been told to fear. The interactions she has with the characters she meets, both slave and plantation owner, are written with utmost care. It’s not surprising to say that Sophie learns a lot about both what it is like to be a slaver and slave, but it is the dedicated and precise prose Sherman has crafted that keeps characters real and the gradual lessons Sophie learns both riveting and thoughtfully presented.

Almost immediately, Sophie meets the girl from the back of the book cover: Antigua, a slave. While Antigua initially clashes with Sophie, the dynamic of their relationship and how it evolves into one of trust and respect serves as one of the more delicate and poignant elements of the book. Antigua, unlike Sophie, has grown up as a slave and must suffer as Sophie has suffered continually, rather than as part of a fantastical adventure. This sobering reality is further darkened by the slow reveal that Antigua is both the product of the abuse white plantation owners inflict on black slave women (and therefore a distant relation of Sophie’s) and the recipient of such abuse. It becomes apparent that it is Antigua’s destiny Sophie has been sent to alter (or define). The freedom of Antigua and Sophie thus are linked as one and the same. At the climax of the novel, Sophie chooses the maze as the hiding spot for Antigua so that they can smuggle her out. What was once a place where Sophie was lost, scared, and alone turns into the place where she becomes the woman she is destined to be.

Which leads me to greatest reveal: that the girl in the yellow dress is Sophie. In order to organize Antigua’s escape to the north, Sophie must pretend to be the plantation owner’s daughter and buy Antigua enough time to escape the maze. The reason we can’t pinpoint when she becomes the woman she is destined to be - one who understands the racial divide from both sides, develops a sense of conviction, and risks her life for her near-kin – is that the transformation is as graceful and seamless as Sherman’s prose. We aren’t so much surprised that Sophie is sticking her neck out for Antigua as we are rooting for her, because we know she has developed the maturity and gumption to take on such a task. This sense of clarity follows Sophie to the present, and as a reader we are excited for the young woman Sophie has become and will continue to be.

I researched the artist, Kathleen Jennings, and I found a wonderful blog post where she breaks down the work that went into composing and refining her illustration for the book cover. It’s really wonderful to see her original thumbnails and explanations. What I found most noteworthy was the fact that the figure on the back of the cover was initially a statue from the maze and was changed to be Antigua, which I definitely think is much more fitting.
Posted by Jen at 3:00 AM