Safety Not Guaranteed, But a Good Time Is 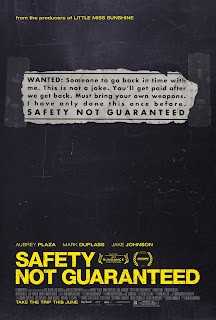 Safety Not Guaranteed is a quirky, indie sorta-romantic comedy with just a touch of SciFi that deals with the desire to fix old mistakes, and the ability of regret to take over a person’s life.

At the start of the film, we’re introduced to Darius, played by a charmingly glum Aubrey Plaza of Parks & Recreation. Darius is an intern at a Seattle magazine, whose most valuable job is changing toilet paper in the office restrooms, until Jeff, a senior writer for the magazine, played by Jake Johnson, suggests to the editor that he seek out the writer of a bizarre ad that is based on the real-life (prank) classified that made its way around the internet a few years ago, and inspired the name of the film. The ad reads:

“Wanted: Somebody to go back in time with me. This is not a joke. You'll get paid after we get back. Must bring your own weapons. Safety not guaranteed. I have only done this once before.”

Jeff figures that an article about the time traveler will be good for a few laughs at the expense of someone who is clearly a bit off. He takes Darius and another intern, Arnau, a somewhat offensive Indian-American stereotype of an intelligent young man without any world experience, to hunt down their subject. However, Jeff has an ulterior motive. His high school girlfriend lives in the same town, and the smarmy journalist plans to hook up with her while his interns write the article for him.
Some of the funniest moments come when the trio tries to hunt down the ad-writer, who we find out is named Kenneth, played by Mark Duplass. The first interactions between Darius and Kenneth are deliciously awkward as Darius presents herself as a potential time traveling partner, while they both try to emulate Hollywood action-adventure heroes. Kenneth warns her that he is being followed by government agents, and that he must be able to trust her completely before they can travel back. The two play off of each other as they begin gathering parts and training for the “mission,” and Darius begins to forget her journalistic boundaries.

While Darius is undercover, Jeff takes it upon himself to find his long-lost sweetheart and rekindle what they once had, spurring a secondary plot that parallels Kenneth’s desire to go back in time and fix his old mistakes. However, Jeff’s story of a jerk who gets what guys like him deserve is far less interesting than the main plotline, and we’re left waiting to get back to Darius and Kenneth.

Time travel in Safety Not Guaranteed adds a twist to an otherwise standard story of misfits in love. Throughout the entire film, we’re questioning whether or not Kenneth really can do what he says, or if he’s just a delusional weirdo. Darius questions his ability to travel through time too, and wavers between wishing it were possible, and truly believing that it is. All of Darius’ doubts come to a head in the final scene, making for an absolutely marvelous ending that answers only the questions it needs to.

Safety Not Guaranteed is well acted, with great dialogue that manages to capture the clumsy but sincere personalities of its characters. While not perfect, and certainly not for anyone looking for hard science fiction, it’s a cute story about two misfits trying to find their place, and time, in the world.