The Hunger Games Is Catching Fire 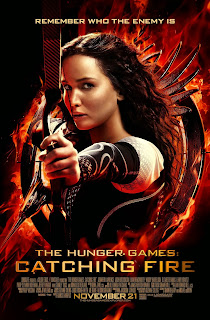 I’m so happy the second movie in The Hunger Games trilogy is literally Catching Fire at the box office.  Not only has it skyrocketed to number one in ticket sales during its first two weeks of release, Grady Smith of EW.com reports that it broke Thanksgiving records in the U.S.:


The film pulled in a terrific $110.1 million over the Wednesday-to-Sunday period — $74.5 million of that during the traditional weekend frame — which gives the sequel a stunning $296.5 million domestic total after only 10 days. (The film has already pulled in a total of $573 million worldwide.)

Catching Fire set a new record for both the 3-day and 5-day Thanksgiving weekend, surpassing Harry Potter and the Sorcerer's Stone, which grossed $57.5 million/$82.4 million in 2001. Lionsgate's $130 million sequel is now on track to easily outgross The Hunger Games' $408 million domestic total. And if it maintains this pace, it could climb above $450 million.

This is no fluke.  Director Francis Lawrence has captured the hunger in Suzanne Collins' second book.  In my review of the first movie, I criticized it for the lack of actual hunger, which is the whole point of the Hunger Games.  But even though I believed those who read the books will be disappointed in the first adaptation, I believe those same readers will be pleased with the sequel.

In Catching Fire, the hunger goes beyond mere starvation.  The districts are hungry for freedom from the Capitol.  Katniss Everdeen (Jennifer Lawrence) and Peeta Mellark (Josh Hutcherson), from District 12, have just won the Hunger Games, but there’s only supposed to be one winner.  Katniss and Peeta have outwitted their authoritarian oppressor, which is seen as a revolutionary act against President Snow.  They journey to the other districts on a victory tour, forced to face the people whose tributes were just killed in the games.  This is insidious for any victor.  He or she could be directly responsible for the deaths of the tributes from any given district.

But Katniss and Peeta go off script in District 11.  This is the home of Rue, an ally of Katniss from the games.  How could she not speak from the heart?  She’s hungry to express remorse.  You have to see the movie to see what happens next.  Their actions unintentionally spread the hunger for rebellion.  President Snow’s reaction to the districts only makes that hunger more frantic.  In return, Snow’s hunger for power intensifies his desire to see Katniss dead.

I know some reviews have been critical that Katniss is more of a bystander as events unfold around her, and she thereby fails to make any hard choices.  But these critics miss the point.  Katniss is the hungriest of them all.  She’s hungry for survival so she wants to run away with Gale Hawthorne (Liam Hemsworth), she’s hungry to save her family so she wants to appease President Snow, she’s hungry for Peeta’s safety so she trusts no one in the Quarter Quell.  Katniss is hungry, desperately hungry, and wouldn’t that be you?

I feasted upon The Hunger Games trilogy because Collins made me taste that hunger.  Ditto with Lawrence’s Catching Fire.