Judging a Book by Its Cover: Magic's Silken Snare

I picked up Magic's Silken Snare

at an independent discount bookstore near my old college. It was hard to ignore the gorgeous painting that adorned the cover, even though the colors were dark and the paperback didn’t necessarily stand out against the flashier text-heavy titles that sandwiched it. Whoever put the jacket design together did himself a favor when he took the focal point of the cover image and copied it as part of the spine design, because either way a casual browser can be struck by the richness of the art, just as I was. 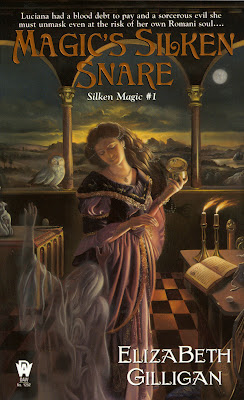 What drew me to Magic’s Silken Snare was the fact that the cover looked very much like a classical Renaissance painting. The Italian art term chiaroscuro (literally an amalgam of the words light and dark) comes to mind due to the clear contrasts present in the image. Candlelight and an ethereal sunrise provide the only light in the painting, and they illuminate important objects that factor into the plot of the novel.  It’s always refreshing to read books where the cover art is actually relevant and a reflection of the contents inside, and artist David Bowers understands this perfectly. According to his site, “For him the idea is the most challenging and rewarding part of the painting.  Symbolism is a main ingredient in his work,” and “There is a small, sometimes weird and unusual world that has been created.” While Bowers’ more recent works are far more fantastical and surreal than this particular cover image, the author of a fantasy work need not be the only person involved who must consider world-building where creation and composition are concerned.

The symbols and images that are most apparent in the cover are the owl, the ghost, a lute with no strings, and the ritual objects and ornaments scattered on the tables to the sides of the woman in the middle, who is clothed very elaborately in a mix of flowing garments and shining pearls and jewels. The ghost seems in agony, reaching up weakly for assistance. There’s something very hard to categorize about what women whose eyes are averted are really thinking; I initially interpreted the woman’s expression to be benevolent, but as I read the book, perhaps due to the magic of the shading of the illustration, her expression seemed to change depending on what was going on.

I assumed an Italian backdrop because the landscape looked very Tuscan to me; and in fact, book is actually set in an alternate Sicily, renamed Tyrrhia. It is lauded as a place that is a refuge from religious oppression, and the main heroine, Luciana, represents one of the larger minorities in the region, the Romani. The Romani, and Luciana in particular, have a special affinity for both magic and the silk trade, which brings in much needed economic stimulation for the small country and provides a foothold for their people. The book concerns the murder of Luciana’s sister, Alessandra, and how Luciana begins to unravel the mystery of her murder. The ghost on the cover is indeed Luciana’s sister, whose appearances in the book are creepy and compelling in equal doses. Alessandra’s body is missing and her soul cannot move on until it is found, and so Luciana has to both enact a vendetta against Alessandra’s killer and save her soul.

Much can be said in praise of Luciana. ElizaBeth Gilligan has created heroine who is compelling, smart, and passionate. She has a sense of women’s rights and social justice which is quite modern, but owes itself to her Romani heritage, which is believable in context. Being a fantasy heroine, Exciting and Suspenseful things do happen to her, but it never feels gratuitous - Luciana has limits, and she has a retinue of secondary characters who are very well done and have skills that help her along the way. Luciana’s strengths are tightly controlled and logically placed; her knowledge of herb lore and magic are well thought-out and skills that need to be mastered and considered before they are implemented (I always like magic better when it needs to be learned, rather than free-for-all, limitless stuff, so I was pleased). Gilligan did her research into Romani/Gypsy culture and her world building has been incorporated in a subtle and indirect manner, making it all the more believable. It is, however, the kind of fantasy novel which uses italics fairly regularly to convey the Romani vernacular and teachings. This can either bother you or you can ignore it, so your mileage may vary.

The romance in the book is believable and ultimately very satisfying; it complements the main plot rather than derailing it. The main protagonists are a little older, already experienced and married. Rather than writing a budding romance, Gilligan chose instead to focus on repairing their marriage. Luciana’s husband, Stefano, is slightly sexist  - believably so for the time period, but just enough to warrant a change in his opinions and beliefs about his wife’s place before the story is through. There are two plotlines at work: one about the murder of Alessandra, and one about the safety of the kingdom, and Luciana and Stefano are the respective investigators of both. Of course, the problems are linked, and in order to get the most complete picture they have to learn to trust and confide in each other.

Strangely enough, the art very much matches the story in theory - but not always in a positive way. Just as the chiaroscuro emphasizes a polarized contrast between light and dark, the story had very obvious villains that were almost cartoonish. For all the subtlety of the magic and the creativity behind Luciana’s character, the antagonists weren’t relatable at all - and left obvious mistakes revealing their hands. What bothered me was that Tyrrhia was constantly lauded as this exception to the rule of religious intolerance, but the antagonists, while malicious and debauched as individuals, had a decidedly Catholic spin. And from little hints in the story dropped here and there, it seems like Tyrrhians are quick to take sides and be swayed by the forces working against the main characters. I was never sure if I was supposed to be impressed by the good qualities of the Tyrrhians, root for the minorities and the minorities only, or accept Tyrrhia as a state teetering on the edge of becoming a theocratic monarchy.

I will be the first to say that the placement of the clues needed to solve the puzzle of the courtly intrigues were plotted with care and the pacing was great, but for all the work that was done to keep the pace I was expecting a few twists and found none. The revelations, while well placed, were fairly linear. And about 60 pages before the end, there is a complete turnaround in plot strength. Suddenly everything feels rushed, with little to no solidity.

As far as being able to interpret and then re-interpret her expression on the cover as it applies to moments in the book, the illustration is a good representation of Luciana’s journey trying to save her sister’s soul. Initially she is grieving, as would be natural, and for much of the book she is concerned with a particular brand of Romani vengeance and justice that she must see done. Last, her fear for the loss of Alessandra’s soul, which would damn her eternally, takes control. For the strength and stability that I thought Luciana’s character had, she makes one huge error - she falls into magic’s silken snare and attempts what is considered heavily dark magic. It’s not that I fault her particularly for making the error and attempting to do and control seriously taboo magic, but it just happens far, far too late in the story for my liking. I’m used to books like The Curse of Chalion or A Wizard of Earthsea, where the big taboo magic is done relatively early on and the main character has to somehow atone for it throughout the course of the same book - I would have much rather she attempted it in the beginning of the sequel, as the very rushed ending practically begs for one.

Bowers as an illustrator has matched Gilligan’s attention to magical and cultural detail in many of the finer points of his illustration, such as the intricacies of the dress and objects adorning the room. Gilligan also matches Bower’s skillful shading practices in creating depth in her two main leads, Luciana and Stefano. But one wishes that so many of the other elements of the book, such as the development of Tyrrhia as a country and character the villains, had more shades of grey than we are given as readers.
Posted by Jen at 3:00 AM