The Keys to the TARDIS: Anniversary Edition

How do you know when something’s hit the big time?

If you’re anyone who wants to be anything, you know that the answer is, “When Hollywood makes a movie about it.”

Now, on the day marking the 48th anniversary of the first appearance of the time-traveling Time Lord of many incarnations -- from the crotchety old man* to the more modern “Last of the Time Lords” to the current “Mad Man with a Box” -- who went on the run from his own people in a rackety old TARDIS,** that announcement comes from the least likely of places, yet with the most prestigious pedigree: the BBC. BBC Worldwide, that is. Worldwide announced last week that Doctor Who would become a big budget film, still some years away, directed by David Yates, the man who directed four of the most recent Harry Potter films (four is being generous because the adaptation of Half Blood Prince was a travesty), and tied in concept only to the “hit BBC America” series (based on the original BBC children’s series), but geared toward a mainstream audience, and most importantly, on the big screen. It seems that Doctor Who is becoming a film, not because American producers want to turn it into something it is not (and non-British, which has always been a fan’s fear), but because the BBC has finally figured out that people love the Doctor because he’s exactly what he says he is and is not trying to please anybody else.

If you’re a true blue (box) Doctor Who fan, you’ve heard it all before, and even sat through two innings of Who films in the 60s produced as big budget adaptations of the first two Dalek serials (starring the guy who played Grand Moff Tarkin in Star Wars*** as a kindly but senile professor who invents a time travelling phone booth, and who fights off Daleks armed with the deadliest of weapons—fire extinguishers).

If you’ve been a fan, you’ve suffered through rumors of a film written by an ex-Doctor and companion, slated to star said ex-Doctor and companion (as well as that guy who invented Edward Scissorhands****), but was crushed as said effort was eventually nixed due to bad timing and other factors (such as no money). You’ve seen the show come, go, die after seven actors played the good Doctor; you’ve wandered in the wilderness of fandom in which fans—that’s people like you and me—wrote their own stories, comics and audio episodes, published them to keep the flame burning, and even became professional writers.

If you were a fan, you were rewarded with the rumors of Nimoy and Spielberg uniting to bring the series back as a film, only to find out that it ended up as a TV movie of the week on Fox, a film that subsequently gasped for air as the ratings and negative fan reaction killed it (for things that everyone would end up excusing later when the BBC revived the series).

If you’ve been a fan lo these many years, you also saw the series return triumphantly to TV with fantastic scripts, popular actors and---*gasp* special effects, the likes of which had never been seen on the show before (namely because it never had any). You’ve stuck around when it was announced that Christopher Eccleston was “suddenly” leaving, mourned the loss of “your” Doctor (David Tennat) as he regenerated in a burst of light and histrionics into Matt Smith, and have learned to embrace the idea that it’s the same character, different face—or “wonderful chap, all of them,” as the Doctor’s friend, the Brigadier used to say reassuringly. 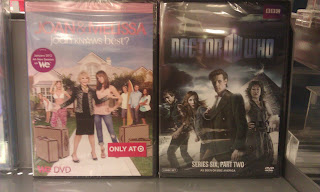 Now, with Matt Smith’s visage appearing on bookshelves and comics across the nation, as well as on billboards and posters throughout various cities (as BBC America and Starz hold screenings, press junkets and ComicCoin appearances to promote the Who series and its offshoots), and on DVD Box sets in Target (see photo), the public is finally ready to embrace the Mad Man and understand that British time travelling phone booths were around decades before Keanu Reeves studied acting.*****

When I was a fledging fan of the series while it was shown on PBS in 1984, shortly after the show’s 20th anniversary, scrambling to find mention of it in Starlog magazine, and attending monthly fan meetings at a local college to watch badly dubbed VHS recordings on a small tube television set, never in my wildest dreams would I have imagined that a version of my favorite underfunded British sci fi program would reach this level of familiarity to anyone. In fact, it was something I was desperate to keep hidden.*******

On a personal level, I knew last week that the Doctor had reached the big time not only because of this great news, but because it was e-mailed to me by 1). A friend who has only recently become a fan and 2). A family member (who merely tolerated my obsession) thought it was cool that someone associated with Harry Potter thought it was worth filming.

So, in sum: something has made the big time when other people email you about a soon-to-be film adaptation by a high profile film series director of your favorite British TV series that no one ever took seriously and which you were embarrassed to admit for years you were a fan of.

Life is strange, and we truly have come full circle.

But the question is…”Why? What’s it all for?”

That very question was howled with indignant fervor by Tom Baker in one of the quintessential Who episodes of his Doctor’s run, "The Pirate Planet," written by the late and inimitable Douglas Adams. The Doctor was asking The Captain, the campy but mad futuristic villain/dictator of the week why he enjoyed shrinking planets (and their entire populations) to the size of a basketball to display on his mantle. The Captain is obviously pleased and twirling his metaphorical mustache at this, but the Doctor is furious at the callousness of a man who treats entire populations as expendable fodder and an entire planet as nothing more than a trophied toy. Along with the other campy but mad villain/dictators of the week in the Tom Baker/Douglas Adams run of the series (The Collector in “The Sunmakers,” Davros in “Destiny of the Daleks,” Scaroth the Jagaroth in “City of Death”) all of these characters have wealth, power, and status; all of them can make or break lives and worlds on a whim, but none have the compassion or heart to allow the people who serve them (or might become servants of them) any of their own enjoyment.  These characters do not even enjoy everyday things that you and I enjoy.

In a world where entertainment has become the myth of our nation, and sci-fi the most popular vehicle of that metaphor today (witness the popularity of both “Star” franchises and the moralities both series have espoused), the time is ripe for the mad Doctor to exit his blue box and take center stage. In a world where corporate executives are downsizing workers while their own profits are up, where foreclosure firms host Halloween parties dressed as foreclosed-upon Americans********, and students are pepper sprayed (as opposed to fire-extinguished) because they are standing in a place where they are told not to stand in order to make a point about the formerly mentioned unfairness of the world, now, more than ever, people need a righteous champion of justice and morals to believe in, someone to stand up to the soulless Daleks of the world, a mad man who is willing to emerge from the blue box that could otherwise shelter him in safety, someone to stand up and say “What’s it all for?”

That’s something worth celebrating (and making a movie about).

*as described in most Target Doctor Who novelizations.
**less than overt series concept description inserted as a line of dialogue in the 20th anniversary special, “The Five Doctors”
***aka Peter Cushing
****aka Vincent Price
***** He did, didn’t he?
*******As evidenced by the fact that I hid the photo of myself, clad in an Izod shirt with a homemade cardboard Dalek for years, until it was unearthed by family members for a recent birthday.
********It’s true. Look it up.
Posted by Jen at 3:00 AM