My parents took me to Star Wars in 1977 when I was seven, but two years later they absolutely forbid me from going to see Alien.  Perhaps they were put off by the eerie promotion, “In space, no one can hear you scream.”  How could Alien be worse than a lightsaber severing an arm and splattering blood over a cantina floor?

By 1982, I finally got to see my first horror flick - Poltergeist.  When a slab of meat became engorged with maggots and a haunted television set could suck a family into static hell, I definitely felt some chills.  Yet none of that holds a candle to the fright Alien eventually gave me.  When my parents deemed me old enough to see horror, I got to rent Alien on VHS.  What a shock, what an unexpected surprise.  An alien ripped its way out of actor John Hurt’s chest.  Ohhhh did that FREAK me out.  Today’s audience might think it tame, maybe even cliche, but at the time it was so unexpected.  So original.  I jerked my eyes away as the alien poked its head out.  I didn’t see it coming.

Alien’s impact on my psyche gave me a fear of nature.  Instead of letting spiders crawl on me, I killed them.  I did not want them biting me, infecting me.  They had to die without mercy.  I shivered at the thought of praying mantises, those predatory insects that will bite the male's head off after mating.  They EAT the males to nourish the next generation.  To me, the praying mantis behaved like the “facehugger” that emerged from the alien egg who mated with/raped John Hurt’s character, then did the equivalent of biting his head off!  As a kid I also squirmed every time I saw video of a squid.  It looked too much like the octopus-like “facehugger.”  To me, this is the essence of horror - a fear that impacts your life.  Oh did I fear being invaded by a parasite.  Tapeworms, ear bugs, ticks.  I guess being torn apart from the inside out by alien impregnation is the ultimate expression of that fear.  Not even the 1970s horror classics like Jaws (fear of sharks) or The Texas Chainsaw Massacre (fear of serial killers) can match my fear of the parasitic.  I’d rather face a shark or chainsaw than a squid on my face reaching down my throat.  Star Trek II: The Wrath of Kahn made a valiant effort to match Alien with a Ceti Alpha Five insect/eel going into Chekov’s ear, but that gave me a shiver, not intense fear.  Nor did that alien black goop of the X-Files.

In 1986 when I saw the sequel - Aliens - the horror was gone.  The alien impregnation only worked once.  Aliens served more as military sci-fi, with the non-stop action of director James Cameron as opposed to the mystery and building tension of Ridley Scott’s classic.  Multiple poor sequels later and those two awful Alien vs. Predator prequels, I declared the sci-fi horror of the original ruined. 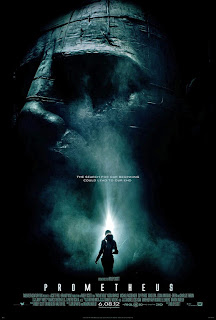 When I went to see Titanic 3D with my wife (15 years after we saw it the first time), the James Cameron classic was preceded by the trailer for Ridley Scott’s Prometheus.  I scolded myself for being out of the loop about this movie.  It’s an obvious prequel to Alien.  That horseshoe shaped spaceship is where the original crew from Alien discovered the “facehugger” eggs. It looks like the origins of the ship will be explained.  I saw a brief clip of what’s known as the “space jockey.”  In Alien this dead creature seemed to be in the driver’s seat of the wrecked spacecraft.  In Prometheus this semi-circle of a ship is taking off on a course toward Earth.  I think the “space jockey” is alive.  It looks like the Earth ship “Prometheus” is going to ram that alien craft, thus marooning it.  Then the tow ship “Nostromo” will be led by a distress call some years later and actor John Hurt will live up to his last name.  I hope Ridley Scott gives us a full origin story, as well as all the horror we can stomach.  I know, bad pun.

The Prometheus trailer began with the mysterious line, “A king has his reign, and then he dies,” then ends with, “Big things have small beginnings.”  Not as dramatic as “In space, no one can hear you scream,” but I think Prometheus has the potential to revive my fear of the parasitic.  In retrospect, my parents made the right call by not letting a nine year old see Alien.  No movie has given me such vivid horror since.
Posted by Jen at 6:00 AM