The Importance of Being Sean Bean

Revelations are sublime things, really, and inner revelations are among the great gifts of fantasy. This revelation on revelations came to me recently during a particularly dreary moment as I led my Cub Scout charges on a wetlands hike which was the centerpiece of a weekend campout. Obligingly, the heavens opened as we were, lo, midway through the hike and dead center in the rapidly growing swampier, swamp. Despite the much more fascinating and altogether more adventurous sounding “bog” that it was labeled, there was no doubt that we were simply in a very sticky swamp.

The Scouts began not to whine and complain, though, but to contemplate in gradually more amazing ways exactly how we would perish when the slimy waters enveloped our brave patrol and only a few uniform hats were left to mark our passing. No, not simply a lot of mud, but soon poisonous mosquitoes, gigantic alligators, eons-overlooked enormous dragon flies were the agents of our doom. Eyes brightened and the Scouts hiked ever faster – actually, ever happier, as these details mounted and the one-upmanship came fast and full, as the rain did, too.

A parent who was along with us took me aside and asked, with more than a little concern, if it weren’t inappropriate for the Scouts to be engaged in such, well, violent and destructive talk. Then, shining like a sunbeam, the revelation hit me through memory: no, actually, it was loads better than contemplation of say, how to lop the heads off alligators or each other, which seem to come up in our usual weekly meetings in town. And, it was astonishingly familiar. You see, when I was ten, and eleven, and twelve, my cohort of friends spent hours contriving the ways that we, too, would meet our ends. Granted, as the children of the Cold War and Vietnam news coverage, we began as G.I.’s, always striving to get a last message to the front or rescue a trapped child from the warzone. Nothing, nothing could cement our nobility more than dying in the attempt. Later, when our reading outstripped the news, we were Boromir, or Roland, or the unknown Viking at Stamford Bridge, holding off the Saxons for just a little longer. In our giggling, our shouting “No, wait!,”  our grape Kool-Ade fueled imaginings, the greater and gorier our sacrifices, the greater more noble our standing. That ideal of noble sacrifice, the possibility to be so devoted and honorable and steadfast that one dies in attempting to follow an ideal or fulfill a mission, has some great appeal and majesty to it. Fantasy allows one to create or relive that majesty with more refinement, perhaps, than the bold minds of young boys, but with no less immediate appeal. 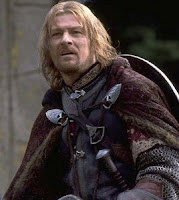 I thought about this memory a little longer over the campfire that evening, and thought more about how my Scouts would likely encounter my touchstones of heroic sacrifice in fantasy and history. I would like to believe through books, and know our own children will first find them in pages, but likely for many of their friends either films or video games will be the vehicle. Enter Sean Bean. I recalled my surprise when Bean was cast as my greatest, most tragic, most wonderful, first-favorite Tolkien character in the Jackson films. Sean Bean? The dashing, skinny Richard Sharpe was too – well, dandy, really, to be Boromir. Of course when I saw the films, Bean more than held the day. When my wife and I belatedly watched the first season of Game of Thrones recently, I had no doubts that Bean was the finest Ned Stark to be cast. But, and hereby hangs a confession, I was a Game of Thrones newb, for some reason never having plunged into Martin’s marvelous world. So between my questions and my wife’s occasional indignation or delight at the adaptation, watching them was a richly conversational experience. I knew that all could not be so clear as it appeared for Ned Stark, given the great number of Very Thick Books on our shelves in the series, and about the third episode I knew in my heart that Ned would not be alive much longer. My wife stolidly refused to confirm or deny this finding, despite my wheedling. It still crushed me some when I knew for myself, though not as devastating as my eleven-year-old self, near tears, for Boromir. The power of Bean’s Ned Stark for me was equally divided between knowing him as Boromir, before, and in knowing that this new character was steady, noble, good, and just – a recipe for noble sacrifice.

And so, Sean Bean and swamp Scouts became the angels of revelation for me in considering why the tales I love, medieval literature, medieval history, and fantasy literature most of all, are my favorites. The self-sacrifice of the characters that speak most to me holds great grandeur and majesty in their falling. These characters carry the banner of “something more” high and proud, when at times we cannot do so as high or proudly as we ourselves would wish. Whether Amon Hen, or Roncesvalles, or the vibrant imaginations of boys slogging through a perilous bog swamp at Scout camp, it is reassuring that fantastic contemplations of sacrifice abound, and that characters and creations who sacrifice themselves hold still a compelling pull.