Judging a Book by Its Cover: The Ocean at the End of the Lane

Editor's Note: Tomorrow is the release of Neil Gaiman's latest novel, The Ocean at the End of the Lane.  We are thrilled today to feature Tia Mansouri's latest column in which she speculates about what the novel might be about, based solely on its cover art.  You can find her previous columns here.  She'll check back in with us in a few weeks, once she's read the novel, and let us know if her expectations were met!

The covers of Neil Gaiman’s adult novels usually always have common aesthetic links in their focus on typography and cooler hues. What I’ve particularly loved about them is how they play with elements of nature, time, and place, implying that something beyond the world we know is reaching into ours, or perhaps the other way around. There’s always some nexus being bent or twisted, if only briefly, irrevocably changing the characters in his novels (and ultimately the reader).

--shares many aspects of this aesthetic: 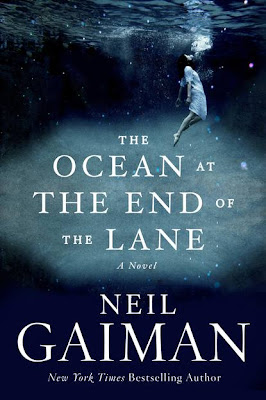 But there’s something a little more daring about this cover – and this is funny to me, since Anansi Boys and American Gods featured those very impressive lightning bolts slashing their way across the composition  – but I’ve noticed that a US cover finally features a person. Gaiman’s adult novel covers tend to not do that, perhaps marking it as a much more personal book.

I’m not sure who the main character in the novel is, since I’ve largely not read any sort of reviews or spoilers, but I notice that the UK cover (see below) features a boy and the US cover features a woman. I’m going to take the choice to mean that the book explores stages of memory and development throughout the lives of the characters; that while it is not a child’s book, it doesn’t necessarily mean it’s entirely an adult’s tale, because sometimes those lines are blurred, or don’t exist at all. 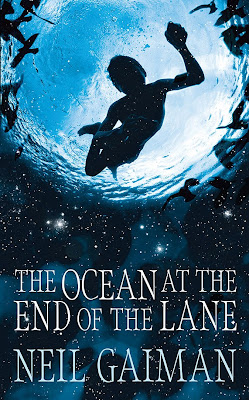 What I only noticed in the US cover after I’d first seen it is there are remnants of a dive or splash to the left of the woman. I’m going to assume she chooses to be immersed, since her body language doesn’t imply a need to resurface quickly. It also seems like she’s now deciding whether she wants to leave at all. What is keeping her beneath the surface? Perhaps something drastic drove her into the water, and she can only reflect on her choices properly while completely submerged. Like many of the characters Gaiman writes, perhaps she’s seen the other side of her world and now cannot go back entirely unaffected. In contrast, the figure in the UK cover seems to be swimming away from the surface. Perhaps he’s already made his decision.

One thematic choice that I love in the two covers is the blend of the celestial and the aquatic. It seems as though there are forces both of this world and of beyond it that have met and are coalescing, and the characters are caught midway between the two. Being that the ocean and space are two well-known frontiers of wonder and of uncertainty, the juxtaposition seems fitting.

There are, of course, questions I want answered. Where exactly is the gap between the real and fantastic going to be? Is it an expanse of time and space? Of childhood and adulthood? Luckily I won’t have to wait much longer before making the discovery myself; once I read the novel I’ll let you know whether I found my answers. The Ocean at the End of the Lane