A Thin Line Between Yesterday and Tomorrow

In Woody Allen's 2011 film Midnight in Paris, aspiring author Gil Pender (played by Owen Wilson), is mysteriously whisked from the 21st century back to the 1920s, where he meets Scott and Zelda Fitzgerald, listens to Cole Porter sing, and gets writing advice from Ernest Hemingway and Gertrude Stein.  Early in the film, Gil is sitting in a nightclub with Zelda on one side, taking in what has happened to him.  At the beginning of the shot, Gil's face looks like this: 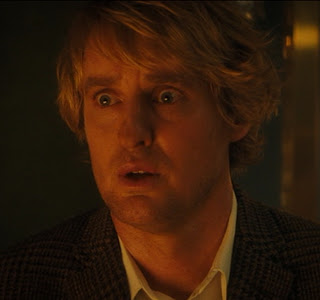 He looks to his left, sees Zelda laughing and drinking, looks forward at the dancers, and then suddenly, something shifts.  His face then transforms to this: It's such a short scene, but it marks the transition from Gil's doubt and confusion about his travel through time, and his enthusiastic embrace of what is happening to him.  And in a movie that is all about boundaries--the boundary between past and present, between reality and fantasy--it is very fascinating to see the boundary between confusion/disbelief and joyful acceptance negotiated so successfully in this series of facial expressions.

It's also quite subtle, which is a key part of its charm.  While the film is rather heavy-handed in pointing out how unsuited Gil is to his fiancée, when it comes to the line between past and present, much of the blanks are left for the viewer to fill in.  Like Gil, we experience the wonder of his time travel without thinking too much about it, albeit in a slightly different way--Gil marvels at all of the famous celebrities from the 20s that he meets, while we as viewers enjoy seeing how these literary and artistic giants are represented on the screen.

It's also fascinating how Allen visually draws a distinction between the real Paris of the 21st century and the Paris of the past.  The film opens with a series of shots of iconic places in Paris--the Eiffel Tower, the Louvre, the Moulin Rouge--but the lighting and coloring is such that it makes them look much more, well, mundane.  Rather than emphasizing colors that makes these scenes seem majestic and awe-inspiring, they are all tied together with a yellowish tint that makes them appear almost sallow: 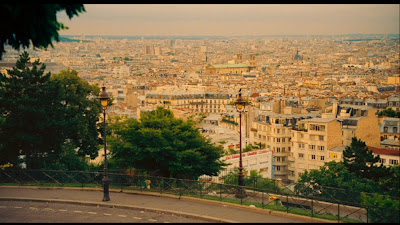 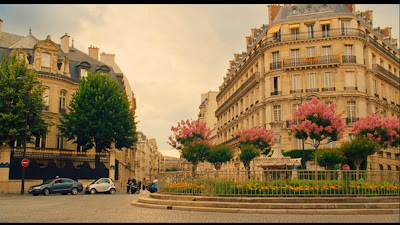 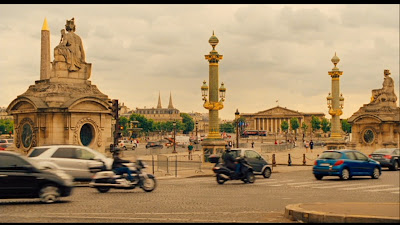 The scenes in the past are all set at night, making the lighting much softer and more romantic.  Even though the mechanics of Gil's time travel are not explicitly explored in the film, the shift in color and light from the present to the past ultimately draw a distinction between the two worlds that is as clear as the different between the wardrobe and Narnia.

In general, I ended up being frustrated by the over-the-top way in which Inez (Gil's fiancée) was drawn, which prevented me from enjoying the film on a narrative level, but I greatly appreciated the aesthetic choices that Allen made.  (There are also some pretty great Surrealist jokes, if you're into that sort of thing.)  And the film asks great questions about the relationship between the present and the past, between imagination and reality, that are at the heart of what it means to create, take risks, and be an artist.