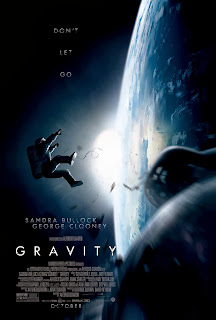 Gravity demands attention for its exciting 3D thrills above the Earth, for its deserved 98% approval rating on Rotten Tomatoes, and for reminding its audience that what we do in space matters.  My favorite line is delivered by George Clooney when he states that everyone just lost their Facebook accounts.  Oh the horror!

A quick scan of the reviews labeled this movie as science fiction.  It’s not.  And that’s where this review will diverge from all others.  I think Gravity is a space fantasy that’s been released at the perfect time.

The U.S. Congress has shuttled (bad pun?) 97% of NASA’s workforce into furlough status.  But Gravity ignites excitement for the U.S. space program on the shutdown’s opening weekend with its satisfying alternate present.  Instead of a final Space Shuttle mission in May 2009 to service the Hubble Space Telescope, and instead of ending the Space Shuttle program with the final mission of Atlantis in July 2011, the movie opens with U.S. astronauts aboard the Space Shuttle Explorer fixing the Hubble Space Telescope.  If only...

Then something goes wrong.  And we’re not talking Apollo 13 wrong.  Gravity isn’t based on a true story.  Thus Dr. Ryan Stone (Sandra Bullock) and Matt Kowalski (George Clooney) are not trapped in space by a NASA furlough.  Their harrowing predicament is the Russians’ fault.  If only...

Moreover, the creation of Space Shuttle Explorer is my favorite touch of fantasy.  It’s a pleasant fantasy that the U.S. has reversed course.  Even though the NASA Shuttle Program lost Challenger in 1986 and Columbia in 2003, then turned Enterprise, Discovery, Atlantis, and Endeavour into museum pieces, the Explorer is a total reboot of the Space Shuttle program.  And that abandoned Hubble Space Telescope gets to be repaired yet again.  If only...

Even astrophysicist Neil deGrasse Tyson confirms the fantastical elements in this movie on Twitter (spoilers if you click the link).  Here are three tweets that are my favorite:


Mysteries of #Gravity:  Satellite communications were disrupted at 230 mi up, but communication satellites orbit 100x higher.

Mysteries of #Gravity:  Nearly all satellites orbit Earth west to east yet all satellite debris portrayed orbited east to west.

Mysteries of #Gravity:  Why Bullock’s hair, in otherwise convincing zero-G scenes, did not float freely on her head.

Liberties with the facts of satellite orbits, the undeniable rewrite of zero-gravity via Bullock’s hair, and the fictional creation of Explorer are all hallmarks of fantasy fiction, but not science fiction.  No new technologies, no time travel, no alternate universe.  Just a thriller about survival in space with a NASA not devastated by sequester cuts or a government shutdown.

In Gravity’s version of 2013 we don’t have to rely on the Russians to get into space.  And it’s the stunning incompetence of the Russians that devastates the world’s space programs.  U.S. politicians had nothing to do with it.  A space fantasy indeed.

Go see Gravity, and forget about U.S. politics for 1 hour and 31 minutes.