The Animated Hobbit And The Desolation of Smaug

In 1977, an animated television movie of The Hobbit entranced me.  At my grade school this animation was shown a couple of times because our media center always hosted a Friday movie before a holiday break.  And The Hobbit is still vivid in my mind.  I didn’t realize how foundational this animation has proven to be in my fantasy life.  It is, after all, the visual story that inspired my imagination about dragons.

When An Unexpected Journey came to the theaters last year, my review mentioned disappointment in the goblins.  All I could do is think back to the “Funny Little Things” song the animated goblins sang as they rode their wargs and chased the dwarves, Bilbo, and Gandalf into the trees.  These goblins had oxen horns and giant tusks.  Their goblin king, so sinister and menacing, had opened its giant maw to eat Thorin Oakenshield in one bite.  Peter Jackson’s movie adaptation has goblins that are, in a word, goofy.  It’s as if Jackson wants humor instead of scary.  This tempered my expectations for The Desolation of Smaug.
To my delight and surprise, Jackson’s second effort begins with Gandalf announcing the need for a “burglar.”  And of course, that burglar is Bilbo Baggins.  It’s reminiscent of how the animated version begins with dialogue between wizard and hobbit that sets the tone for the rest of the story:

Gandalf:  “Bilbo Baggins?”
Bilbo:  “Yes.”
Gandalf:  “I am looking to hire a burglar.”
Bilbo:  “Burglar?  I’m afraid you’ve come to the wrong place.”
Gandalf:  “You mean you do not wish to share a grand adventure?”
Bilbo:  “Dear me no.  We hobbits are plain, quiet folk.  Adventures make one late for dinner.” 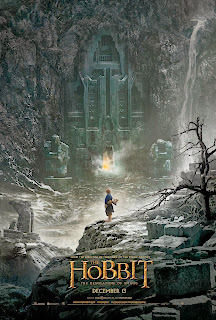 From that point on the word “burglar” is used throughout the animation.  Bilbo is given a contract that lists him as “Burglar Baggins.”  Thorin Oakenshield lifts his mug to make a toast at Bilbo’s table and says, “Gandalf, dwarves, and burglar Baggins.”  Bilbo interrupts and says, “What is this burglar business?”  Gandalf replies, “If you prefer, you can say expert treasure hunter.”  Bilbo likes that, but everyone still calls him burglar.  When Gandalf releases the dwarves from the trolls, Thorin says, “Where’s that bumbling burglar?”  But Bilbo has found a troll horde.  Gandalf says, “Not bad burglar, for your first attempt.”  Gandalf also says “excellent burglar” when Bilbo finds the secret door on the map of the Lonely Mountain.  And so it also goes with The Desolation of Smaug.

The thirteen dwarves depend on Bilbo to do several things:  steal a peek at the orcs chasing them, act as a thief of keys in the elven kingdom, and then snatch the Arkenstone from the dragon Smaug.  From beginning to end, Bilbo is the burglar.  This is the focus that I remember as a kid, unlike An Unexpected Journey where the movie begins in the future with an older Bilbo Baggins writing his tale “There And Back Again” for his nephew Frodo.  This set the tone for that movie being a prequel to The Lord of the Rings rather than a story about a hobbit.  And Bilbo doesn’t find his inner burglar until he takes Gollum’s ring.  With the Desolation of Smaug the focus is back on the “burglar” as it should be.  Now that Bilbo is given his due, the rest of the ensemble comes together.

The Desolation of Smaug is a true adventure.  Where An Unexpected Journey’s encounter with goblins seemed like a rerun of the chase through the Mines of Moria from The Lord of the Rings, the water barrel chase (you’ll see) is original, and a fun romp.

And unlike the goblins of the first movie, Jackson takes scenes I remember from the animation and elevates them into the “grand adventure” of which Gandalf speaks.  Examples are Mirkwood forest and its spiders, the elven wine barrels, and even Smaug himself.  Moreover, I thought Jackson’s extra material in the first movie sort of ruined the book version of The Hobbit.  Thus came my nostalgia for the animation which began simply:  “In a hole in the ground there lived a hobbit.”  Yet I believe The Desolation of Smaug, as it turns out, is a more faithful adaptation of the book than the animation.

And as for the added material in Jackson’s movie, the side story of the Necromancer works, the return of Legolas works, even the introduction of the “she-elf” Tauriel works.  I’d say Tauriel schools Katniss Everdeen of Catching Fire in the art of using a bow.  This updated character is a necessary addition, and follows in the tradition of Eowyn from The Lord of the Rings who plays a powerful female lead in the man’s world of Middle Earth.

I liked Jackson’s second effort; even the cliff hanger ending reminds me of the Empire Strikes Back.  There’s no resolution.  You have no choice but to see the final installment.  And I’m looking forward to Jackson’s interpretation of the ending because I have no idea what’s going to happen with the Necromancer.  Even more reason to look forward to the final movie.

I give the Desolation of Smaug two dwarf thumbs, two hobbit feet, and two dragon claws up.